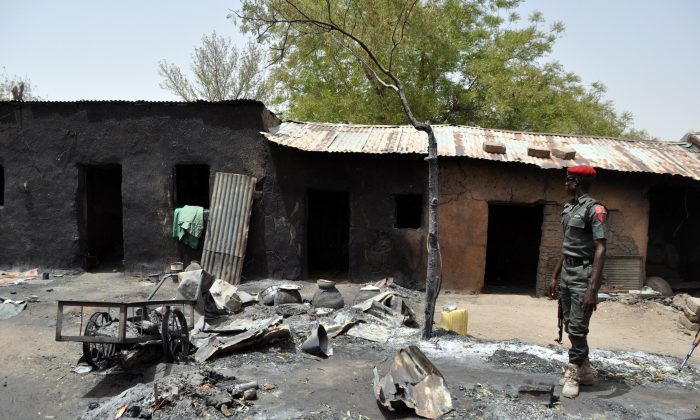 An anti-riot policeman stands in front of a burnt house in Gubio in Borno State, northeast Nigeria, on May 26, 2015. (Stringer/AFP/Getty Images)
Africa

YAOUNDE, Cameroon—Four suicide bombers attacked a market and town on Monday in Cameroon’s Far North region near the border with Nigeria, killing at least 35 people and wounding 65 others, officials said.

“The suicide bombers were escorted to Cameroon by Boko Haram fighters,” Bakary said. “We must trace them wherever they are.”

Two of the suicide bombers targeted the market of the Cameroonian border town of Bodo and two others detonated explosives in town, said the region’s governor, Midjiyawa Bakari. The wounded have been taken to hospitals in the northern Cameroon city of Kousseri, he said.

Boko Haram joined the Islamic State (ISIS) in March. On Monday, the ISIS-linked Amaq News Agency posted a message reporting suicide bombings in northern Cameroon, according to the SITE Intelligence Group, which monitors jihadi websites. The message said the attacks on Bodo village targeted “gatherings of the militias allied with the army operating on the border with Nigeria.”

Boko Haram’s six-year insurgency has killed about 20,000 people and displaced 2.3 million, according to Amnesty International and the United Nations.