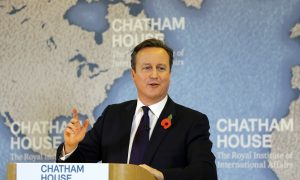 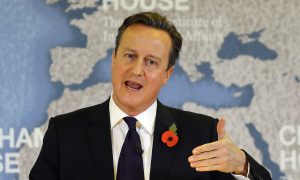 Cameron Pledges to Outline Strategy Against ISIS This Week
0 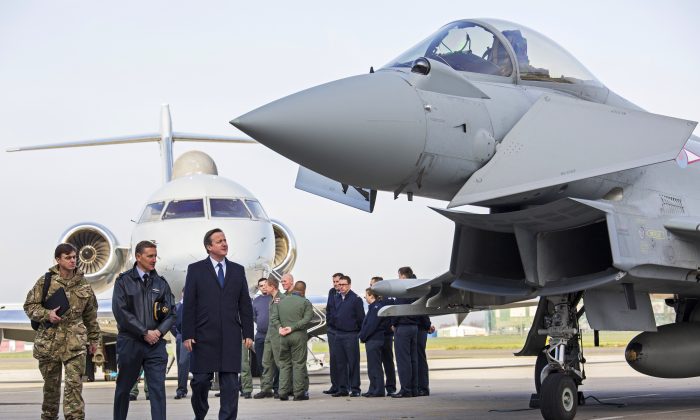 British Prime Minister David Cameron at RAF Northolt, London. He stopped to talk to service personal and view military hardware on his way back from visiting President Hollande in Paris and is ahead of the SDSR statement on Nov. 23, 2015. (Jack Hill)
Europe

LONDON—Prime Minister David Cameron tried to persuade reluctant lawmakers to back airstrikes on the ISIS group in Syria, saying Thursday that the Paris attacks have given the fight new urgency and Britain owes it to key allies to act.

Cameron told the House of Commons that U.S. President Barack Obama and French President Francois Hollande had urged Britain to join the military campaign in Syria.

“These are our closest allies and they want our help,” he said.

Cameron said if Britain didn’t act after ISIS-claimed attacks in Paris that killed 130 people, friendly nations might well ask, “if not now, when?”

The Royal Air Force is part of a U.S.-led coalition attacking the militants in Iraq, but not in Syria. Cameron has been reluctant to seek backing for strikes in Syria since lawmakers voted down his 2013 plan to launch RAF strikes against the forces of President Bashar Assad.

Cameron replied Thursday with a 36-page letter, arguing that Britain should act to deny the ISIS group a “safe haven” in Syria from which to plot mass-casualty attacks around the world.

He said airstrikes should be part of a “comprehensive overall strategy” to destroy ISIS, end the Syrian war and help rebuild the country.

Cameron Pledges to Outline Strategy Against ISIS This Week

Attempting to allay legislators’ concerns, he argued that military action is legal under the U.N. charter’s right to self-defense. And he said that while ground forces would be needed as well, they would not be British.

Cameron said airstrikes will not increase the danger of attack in Britain, already considered high. He said British authorities have foiled seven attacks in the past year either planned or inspired by ISIS.

Cameron wants to hold a vote in Parliament, but said he would only do so if “there is a clear majority for action, because we will not hand a publicity coup to ISIL”—another acronym for the militant group.

He’s likely to decide after Thursday’s Commons debate whether to hold a vote next week.

Initial reaction from opposition lawmakers was cautious. Jeremy Corbyn, the left-wing leader of the main opposition Labour Party, said military action could have “unintended consequences”—as it did in Iraq, Libya and Afghanistan.

Angus Robertson of the Scottish National Party said his legislators would not support “a bombing campaign without effective ground support in place or a fully costed reconstruction and stability plan.”

The debate is shadowed by the legacy of Parliament’s divisive 2003 decision to join the U.S.-led invasion of Iraq. That decision was made on the basis of flawed intelligence about Saddam Hussein’s alleged weapons of mass destruction, and in the absence of an adequate plan for postwar reconstruction.

“This is about learning the lessons of Iraq,” Cameron said, stressing that “we are not in the business of dismantling the Syrian state or its institutions.”