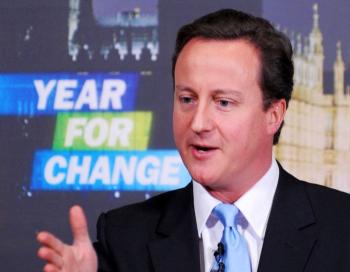 The opposition Conservative Party launched its election campaign over the weekend—with the backing of what is understood to be a US$29 million war chest.

On Jan. 4 a nationwide poster campaign costing $810,000 will be rolled out across the country, promoting a “year for change.”
Under British law, a general election must be held every four years, but can be called earlier at the discretion of the current prime minister. The deadline for Gordon Brown is June 2010, but it is believed that the country will go to the polls as early as May 6.

“The next general election is no more than 153 days away and I don’t think it can come soon enough,” said David Cameron, in a speech on Saturday announcing the beginning of the Conservative Party’s election campaign.

“Let’s make this the year for change,” he said.

Gordon Brown was expected to make an official statement on Sunday.

The Conservative Party’s campaign budget is the biggest in Britain’s electoral history—$141,000 more than Labor’s winning investment in the 2005 election.

Since David Cameron took office as leader of the opposition, he has engaged in an unprecedented fundraising campaign—which involved offering one-to-one meetings with private donors in exchange for an $81,000 investment to the party’s coffers.

According to reports, 100 businessmen have signed up for the “premier club,” giving them early access to the man who could become prime minister this year.

Many more are also said to have paid for access to other senior Conservative figures—including shadow finance minister George Osbourne. Cameron alone is said to have raised $8.1 million for the party.

The approach was slammed as “unethical” by Labor MP John Mann, and a repeat of the “Cash for Honors” affair that was widely regarded to have brought down Tony Blair.

Indeed, Blair’s fundraiser Lord Levy—nicknamed “Lord Cashpoint” by Labor insiders—is reported by The Times as acting as an adviser to Cameron’s fundraiser, former hedge fund boss Stanley Fink, on the risks associated with the role.

Although Labor has the backing of the country’s largest trade unions, as well as high profile donors such as Harry Potter author J.K. Rowling, they are believed to have a war chest of only $12.9 million, according to The Times.

According to a newly released YouGov poll, conducted at the end of last year, the Conservative Party would win 40 percent of votes if an election were to be held now, with Labor trailing at 30 percent and the Liberal Democrats at 17 percent.

On Sunday, Gordon Brown said that the Labor Party would “fight every inch of the way.”

“I think when you are behind in the polls you have got to regard yourself as the fighter,” he said.

“Everything I have ever won in my life I have had to fight for.”