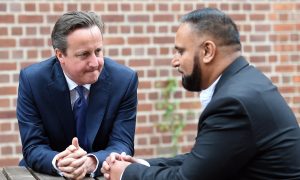 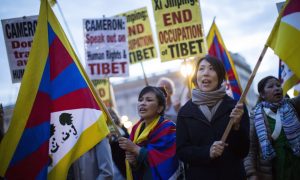 Amid the Pomp and Splendor, Protesters Urge David Cameron and Xi Jinping to Open a Dialogue on Human Rights
0 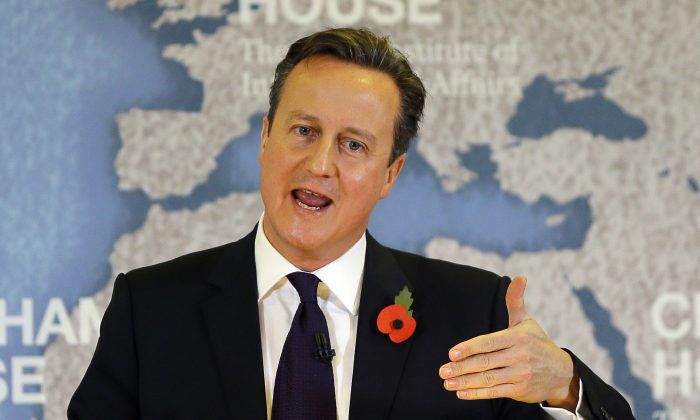 Cameron Pledges to Outline Strategy Against ISIS This Week

LONDON—British Prime Minister David Cameron will begin to lay out his case this week for the Royal Air Force to start hitting ISIS targets in Syria, something he has been eager to do but feared being blocked by Parliament.

Speaking in Paris on Monday after meeting French President Francois Hollande, Cameron said the two leaders agreed to increase counterterrorism cooperation. He called for greater European Union-wide efforts to share intelligence to stop extremists and offered the use of the air base at Akrotiri on Cyprus for actions in Syria against the ISIS group.

“The United Kingdom will do all in our power to support our friend and ally France to defeat this evil death cult,” he said.

Cameron lost a vote in Parliament two years ago to allow attacks on Syria, and has been reluctant to even suggest another until he could be certain to win. The RAF is already participating in airstrikes in Iraq.

The mood in Parliament since then has changed. The previous vote was also directed at Bashar Assad’s government to deter the use of chemical weapons — not ISIS group extremists.

The attacks in Paris, the bombing of a Russian jetliner and the shootings of British tourists in Tunisia has brought the threat of the ISIS group close to home. The vote in the U.N. Security Council calling for action against the group may also sway the undecided.

Labour’s spokeswoman on defense issues, Angela Eagle, told the BBC on Monday that even the party’s leader, Jeremy Corbin — who is known for his anti-war stance in general — may vote in favor.

“My understanding is he is not a pacifist and that means that it is conceivable,” Eagle said.

But any measure is problematic because many lawmakers fear revisiting the chaotic situation that occurred in the Iraq war, in which 179 U.K. troops died. The stain of that conflagration weighs heavily on Labour lawmakers, many of whom blame their party’s former Prime Minister Tony Blair for dragging the country into war on false claims that Iraq had weapons of mass destruction and without a firm plan for Iraq’s future.

Britain’s arsenal includes the Brimstone missile, whose technology enables it to ensure accuracy against moving targets, such as gun trucks used by ISIS group extremists. British officials say this could reduce civilian casualties.