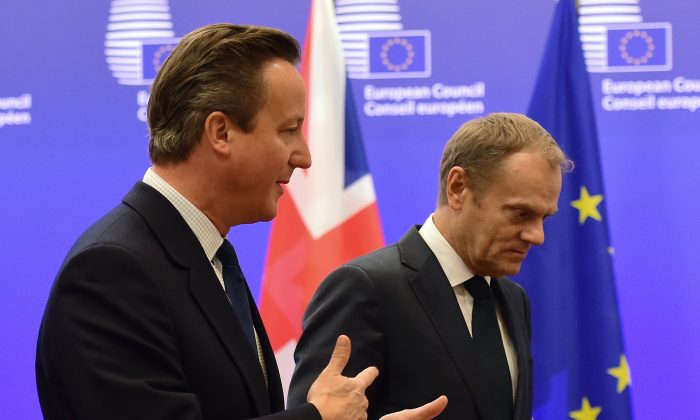 LONDON—British Prime Minister David Cameron and European Council President Donald Tusk will meet Sunday to try to hammer out a deal aimed at keeping the U.K. in the EU, after Cameron said the existing proposal is “not good enough.”

The two men will hold talks over dinner at 10 Downing St., with Cameron due to demand powers to limit British welfare benefits to migrants from other EU countries starting immediately after an upcoming U.K. referendum on EU membership.

Welfare benefits have become the key issue, and main sticking point, in Britain’s negotiations with the rest of the EU.

The 28-nation bloc allows citizens to work and live freely among member nations—but Britain’s Conservative government says hundreds of thousands of people from Eastern Europe who have flocked to the U.K. are straining schools, hospitals and social services.

On Friday top EU officials offered Britain a mechanism known as an “emergency brake” that would let the U.K. temporarily limit tax credits—given to workers in low-paid jobs—and housing benefit to immigrants if the country’s welfare system comes under strain.

The proposal could satisfy Britain’s goal of regaining some control over immigration and other countries’ desire to maintain the principle of free movement.

Cameron said Friday that the proposal is “not good enough … but we are making progress.”

British officials say he will tell Tusk that the “emergency brake” must take effect immediately after a British vote to stay in the EU, and last for as long as it takes to reduce the level of migration. Cameron’s initial proposal was for a four-year halt.

Britain also wants to see more power ceded from Brussels to national parliaments, a reduction in EU red tape and protection for the nine EU countries, including Britain, that do not use the euro single currency.

Before the meeting, Tusk tweeted that he would “present solutions” to all of Britain’s main areas of concern. He said agreement must be acceptable to all 28 EU members, with “no compromise on fundamental freedoms.”

Despite the distance between the two sides, officials hope to strike deal at a Feb. 18-19 summit. If he gets enough reform, Cameron will urge British voters to back continued EU membership in a referendum that must be held by next year and could come as early as June.