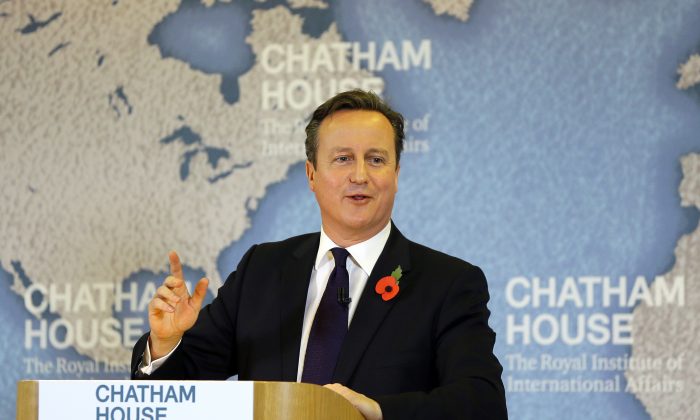 LONDON—British Prime Minister David Cameron laid out his government’s demands for European Union reforms Tuesday, saying a looser “British model of membership” would let him argue his country shouldn’t walk away from the 28-nation bloc.

Cameron said the European Union must agree to “irreversible changes” that would redefine Britain’s relationship with Brussels — and limit freedom of movement by allowing the U.K. to restrict benefits for migrants from other member states.

Britain will hold a referendum by the end of 2017 on whether to leave the 28-nation EU. Cameron says he wants to stay in, provided he can secure greater autonomy for Britain. He called the vote the most important Britons would face in their lifetimes.

Cameron outlined his demands Tuesday in a speech in London and a letter to European Council President Donald Tusk.

He told an audience at the Chatham House think-tank that Britain wants change in four areas, including protection for countries such as Britain that don’t use the euro single currency, less red tape and greater power for national parliaments to opt out of rules made by the Brussels-based EU.

“We are a proud, independent nation. We intend to stay that way,” Cameron said, stressing that Britain wanted a “clear, legally binding and irreversible” exemption from the EU’s commitment to an ever-closer union.

The European Commission called some of the issues raised by Cameron “highly problematic.”

Cameron acknowledged that getting the other 27 nations to agree to Britain’s goals would be a major challenge — but not “Mission Impossible.”

“I would argue that it’s Mission: Possible, but it’s going to take a lot of hard work to get there,” he said.

In the letter to Tusk, Cameron says Britain’s concerns “really boil down to one word: flexibility.”

He asked for legally-binding recognition that the EU has more than one currency and that changes made by eurozone members — such as the creation of a banking union — must be voluntary for non-eurozone members like Britain.

He also said taxpayers outside the eurozone should “never be financially liable” for operations to support the euro currency.

On issues of sovereignty, Cameron told Tusk it is necessary to formally “end Britain’s obligation” to work toward ever closer union with Europe and to strengthen national parliaments.

On the touchy subject of immigration, the prime minister said the free movement of people was creating unstainable pressure on Britain’s schools, hospitals and public services.

He said migration has been far higher than the EU’s “founding fathers” ever predicted and that Britain needed to find a way to “reduce the current very high level of population flows from within the EU into the U.K.”

He also called for newcomers who come to Britain from the EU to be required to “live here and contribute” for four years before they can receive certain benefits and social housing.

That is likely to be a tough sell with some EU leaders, who see free movement of labor, as well as of goods, as a cornerstone of the bloc.

“We don’t want to destroy that principle,” Cameron said in his speech. “But freedom of movement has never been an unqualified right.”

European Commission spokesman Margaritis Schinas said that some of Cameron’s proposals for talks to make sure that Britain stays in the EU may be feasible, but insisted others ranged from “difficult to worse.”

He specifically latched on to proposals where freedom of movement would be limited by allowing the U.K. to restrict benefits for migrants from other member states.

“Some things which are highly problematic as they touch upon the fundamental freedoms of our internal market, direct discrimination between EU citizens clearly falls into this last category,” Schinas said.

British finance chief George Osborne said in Brussels that he would be meeting the eurozone’s top official, Jeroen Dijsselbloem, and European Commission President Jean-Claude Juncker to start the process.

“We’re going to sit round the table and the negotiations are going to start and I think we have a real good chance to achieve the reform that we all want to see,” he said.