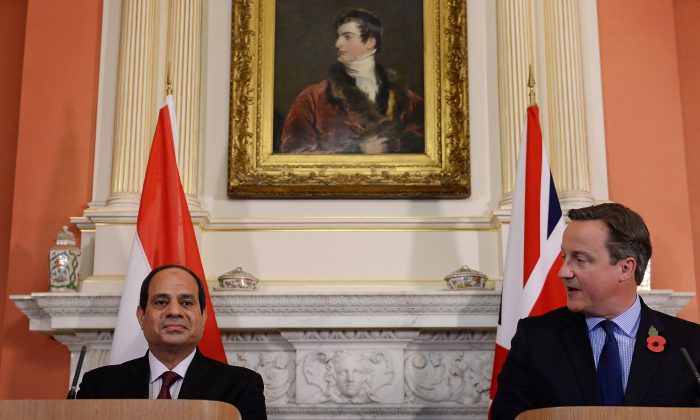 LONDON—British Prime Minister David Cameron declared Thursday it was “more likely than not” that a bomb brought down a Metrojet flight packed with Russian vacationers—a scenario that Russian and Egyptian officials dismissed as premature speculation.

Cameron said he had grounded all British flights to and from Egypt’s Sinai Peninsula because of “intelligence and information” indicating that a bomb was the likely culprit in the crash Saturday that killed all 224 people onboard. The move stranded thousands of British tourists at the Red Sea resort of Sharm el-Sheikh.

Cameron said he had “every sympathy” with the Egyptians, who rely heavily on tourism, but had to “put the safety of British people first.”

The Islamic State militant group has claimed responsibility for bringing down the plane, a claim dismissed as not credible by Russian and Egyptian officials. Egypt is, however, fighting an Islamic insurgency in the area where the plane crashed and Russia is supporting the Syrian government with airstrikes against IS targets.

“We don’t know for certain that it was a terrorist bomb … (but it’s a) strong possibility,” Cameron said at his 10 Downing St. office. “There’s still an investigation taking place in Egypt. We need to see the results of that investigation.”

Cameron said British security and aviation experts were working with Egyptian officials to tighten security at the Sharm el-Sheikh airport so the British flights could resume.

British airlines Monarch and easyJet planned to fly from Sharm el-Sheikh on Friday to bring stranded tourists back, subject to security reviews. EasyJet was running nine flights to London airports and one to Milan while Monarch planned to run two scheduled flights and three additional flights.

British officials said bringing back all the 20,000 Britons in the popular tourist destination may take up to 10 days.

British Transport Secretary Patrick McLoughlin said short-term measures, including different luggage-handing arrangements, would be put in place so the flights could leave. But he said Egypt would have to put in tighter, long-term security measures before British flights could resume on a regular basis.

Britain’s action has irritated both Egypt and Russia, and overshadowed a visit to Britain by Egyptian President Abdel-Fattah el-Sissi. After meeting with Cameron, el-Sissi said British officials had sent a security team to check the Sharm el-Sheikh airport 10 months ago and were satisfied with the results.

“They checked the security actions, they were happy with that,” he told a news conference, speaking through an interpreter.

But he said Egypt stood “completely ready to cooperate with all of our friends” to ensure the safety of tourists.

Cameron also spoke by phone Thursday with Russian President Vladimir Putin, and Downing St. said the two men “agreed we face a common threat from terrorism.” The Kremlin struck a different tone, saying Putin had told the British leader it’s necessary to rely on data yielded by the official crash probe while assessing the reason for the crash.

Metrojet has ruled out a pilot error or a technical fault as a possible cause of the crash, drawing criticism from Russian officials for speaking with such certainty too soon.

Putin’s spokesman, Dmitry Peskov, insisted Thursday that investigators were working on all possible theories as to why the Airbus A321-200 crashed Saturday in Egypt’s Sinai Peninsula just 23 minutes after taking off from Sharm el-Sheikh. He said naming just one possibility was mere speculation.

“One cannot rule out a single theory, but at this point there are no reasons to voice just one theory as reliable—only investigators can do that,” Peskov told reporters in Moscow.

Russian Foreign Ministry spokeswoman Maria Zakharova said if Britain did have information about a bomb on the plane, it’s “really shocking” that hasn’t been shared with Russia.

“The investigation team does not have yet any evidence or data confirming this hypothesis” of a bomb bringing down the plane, he said.

U.S. satellite imagery detected heat around the jet just before it went down Saturday, two U.S. officials told The Associated Press. The infrared activity could mean many things, including a bomb blast or a plane’s engine exploding due to a malfunction.

Another U.S. official told the AP that intercepted communications played a role in the tentative conclusion that the Islamic State group’s Sinai affiliate had planted an explosive device on the flight. The official added that intelligence analysts don’t believe the operation was ordered by Islamic State leaders in Raqqa, Syria, but possibly done by its affiliate in the Sinai.

All the U.S. officials spoke on condition of anonymity because they weren’t authorized to discuss intelligence matters publicly.

Philip Baum, editor of Aviation Security International, said a bomb could be placed on a plane in an endless number of ways, including by someone with airside access or by those on catering teams or maintenance crews.

“The options are almost too many to consider,” he said in a telephone interview.

“It is not a terror act. It was an accident,” he declared in Luxor as authorities opened three tombs to the public for the first time in an effort to encourage tourism.

Russia’s top aviation official, Alexander Neradko, said investigators are pursuing several theories as to why the plane crashed, including looking for traces of explosives on victims’ bodies, their baggage and on the plane debris as well as studying other “aspects linked to a possible terrorist attack.”

He said the probe is likely to take several months.

At the Sinai crash site, forensic evidence including the airplane’s black box was still being analyzed. Rescue teams have retrieved 140 bodies and more than 100 body parts while combing a 40-square kilometer (15.4-square mile) area.

In the ancient Russian city of Veliky Novgorod, 160 kilometers (100 miles) south of St. Petersburg, family and friends said a tearful goodbye to Nina Lushchenko, the first Metrojet crash victim to be buried.

The 60-year-old school cafeteria worker was remembered as a good mother and grandmother after a church service in a whitewashed 16th-century church overlooking the Volkhov River.

British tourists in Sharm el-Sheikh backed the flight ban but also spoke of their fondness for the resort.

“We understand why the government have done it, but I am really worried for the Egyptian people because—particularly in the Red Sea resorts—they are so dependent on tourism,” said Paul Modley, a 49-year-old Londoner who has travelled to the town seven times in the last nine years.