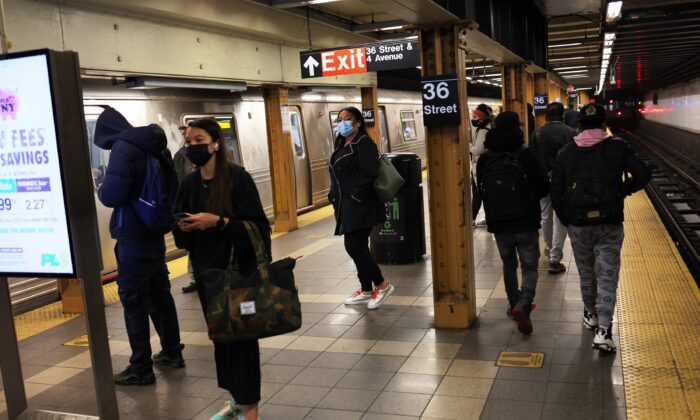 People wait for the train at the 36th Street subway station, where a shooting occurred the day prior, in New York City on April 13, 2022. (Michael M. Santiago/Getty Images)
NY News

Surveillance cameras inside a New York City subway station were not working when a person opened fire on April 12, according to officials.

Preliminary indications are that cameras inside the station where a man fired a gun were malfunctioning, New York Mayor Eric Adams, a Democrat, said.

“The preliminary review stated that at that particular station there appeared to have been some form of malfunction with the camera system. That is still under investigation,” Adams said on WCBS. “We are concerned that the cameras were out,” Adams said on Fox.

Authorities say a man donned a gas mask on Tuesday morning as a train pulled into the 36th Street Station in Sunset Park, a neighborhood in the borough of Manhattan, before opening two smoke canisters and firing at least 33 times.

Ten people were struck by bullets while additional persons were injured by shrapnel or in other ways.

New York officials still have not released images or video footage of the attack and the initial photographs of a person of interest, Frank James, came from a mugshot and an older YouTube video, though a new picture released early Wednesday showed him inside the subway system.

“We know that there were three stations that the video wasn’t working,” NYPD Chief of Detectives James Essig told reporters during a briefing.

“We’re still investigating that, to see why or how, whether there was a mechanical problem or an electrical issue,” Essig said.

Police say the suspect got on the train at the Kings Highway Station and took the subway eight stops.

The city’s subway system is run by the Metropolitan Transportation Authority (MTA), which installed cameras in all stations as of 2021.

MTA CEO Janno Lieber did not dispute the assertion that cameras at the 36th Street Station weren’t working but said there were 600 cameras along the line on which James traveled and that officials have found footage from when James entered the subway.

“I think that in the one location by the turnstile, there was apparently a server problem, which they had been working on the day before,” he said on WCBS. “But the bigger issue is, there’s so much video evidence from all of the stations on this line that there are images of this fellow that are going to be found.”

Authorities said reports of trouble with police radios were true, but stemmed from officers failing to switch frequencies when they entered the underground system.

No officers were present inside the station when the attack unfolded.

State officials examined the MTA’s safety and security equipment, including cameras, from Jan. 1, 2014, to July 29, 2017. In a report on the findings, officials said some preventive maintenance was not performed. For instance, 31 percent of the expected preventative maintenance visits for 223 cameras and affiliated monitors at 10 stations were not done.

About a quarter of the calls for cameras and other recording devices from the same period of time took longer than the three-day target to be repaired.

The MTA told officials that the failure to complete the scheduled maintenance stemmed from workers who lack technical skills and competing priorities.

In a followup audit, officials with the New York State Comptroller’s office said on Sept. 18, 2019, the MTA had only fully implemented two of the six recommendations, and had not implemented at all focusing resources on meeting preventive maintenance targets.