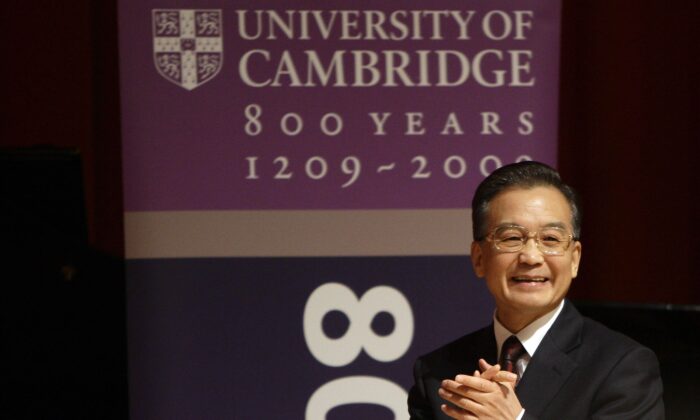 The centre was set up in 2016 at Jesus College Cambridge and was reviewed by a panel of the college’s academics following a slew of media exposes about worryingly close ties with the CCP.

The China Centre will no longer receive funding from the Cambridge China Development Trust—set up by Professor Peter Nolan—and will be renamed the China Forum to restore its reputation and confidence.

The review said the China Centre should follow the college’s principles of “academic freedom” and that this must be clearly stated on the centre’s website.

“The centre should demonstrate its commitment to this principle by being bold and proactive in planning and running seminars and not shying away from controversial topics,” it added.

Nolan—a fellow of Jesus College and an expert on China’s economy—taught hundreds of the CCPs most powerful corporate chiefs members and party officials between 2005 and 2019, according to The Times.

Documents from the UK’s Foreign Office and obtained by a newspaper last year showed large delegations—sometimes numbering over 30 senior officials from major state-owned enterprises and government departments in China—were chosen by Beijing each year to attend classes at Cambridge.

An organisation called the China Development Research Foundation was a previous co-organiser of the college’s China programme, and it stated that attendees have included leaders from the CCP’s Central Committee.

The revelations exposed the depth of the so-called China dependency problem among top universities that make up the elite Russell Group, and which have become to rely heavily on Chinese money.

Sir Iain Duncan Smith, a member of parliament and a member of the  UK Parliament’s Inter-Parliamentary Alliance on China, or IPAC, said in an interview with the Spectator magazine all universities “must wake up” to the threat of dependency “on this brutal authoritarian state, which is undermining academic freedom and the independence of our great institutions of learning.”

Nolan has previously made headlines.  His role as Chong Hua Chair at the university’s Centre of Development Studies was funded by a £3.7m donation in 2012 from the Chong Hua Foundation, believed to be controlled by the daughter of China’s former prime minister, Wen Jiabao.

Nolan, who is no longer the chair, had allegedly been her professor at Cambridge and the funding was secured after a series of secret meetings in Beijing between 2009 and 2011.

Last year, the Sunday Times claimed Nolan attempted to avoid debates on China’s human rights record.  Jesus college risked being “perceived as being a campaigning college for freedom for Hong Kong, freedom for the Uighurs” if it held overtly anti-China events, he said.

The Master of Jesus College, Sonita Alleyne OBE said in a statement: “The world has changed dramatically since the China Centre was established in 2016, which is why the College’s Council commissioned this detailed review and why we are taking the recommendations forward immediately.

“We will change the China Forum’s funding model and make its aims and funding fully transparent, so the forum can continue its highly regarded scholarly seminar series which has covered topics as diverse as the ancient Liangzhu civilization, China’s high-speed trains, Xinjiang and its Muslim Minorities, and the future of Hong Kong since the series was launched in early 2019.”