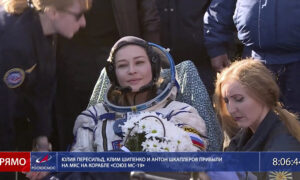 A 1,200 year-old “lost” city was discovered in a mountainous region in Camdodia, according to a report.

The city of Mahendraparvata, which predates Angkor War, was revealed by new laser-scanning technology and was more extensive that previously believed, according to the Sydney Morning Herald. The city includes temples hidden by jungles.

University of Sydney archaeologists found more than two dozen temples and some evidence of canals, roads, and dykes. Mahendraparvata was built around 350 years before Angkor Wat, the Hindu and Buddhist temple that is visited by millions each year.

“We see from the imagery that the landscape was completely devoid of vegetation,” Damian Evans, director of the University of Sydney’s archaeology center in Cambodia, told the Herald.

“One theory we are looking at is that the severe environmental impact of deforestation and the dependence on water management led to the demise of the civilization … perhaps it became too successful to the point of becoming unmanageable,” he said.

However, Jean-Baptiste Chevance, who is director of the Archaeology and Development Foundation, told the Cambodia Daily that the Morning Herald’s report makes the discovery seem “very sensational.”

“The way they [the Sydney Morning Herald] put it together can make it feel very, very sensational,” he told the Daily. “To be honest, it’s not totally new—the technology was new—but most of the monuments were well-known,” he said.

He added: “It is an exaggeration to say a lost city has been found because if you’re working in Cambodia you know it’s been there since the 1900s.”

Chevance said that the new technology allowed researchers to uncover “a whole network of roads and dykes that were linking monuments that were already known.” He added that the team has been doing excavations in the area since 2008.

“We’re talking about a city that is more than 1,000 years old and is all underground. What you see at the site is what looks like termite hills. If you didn’t know, you might think it’s natural,” cartographer Stephane De Greef told the paper.