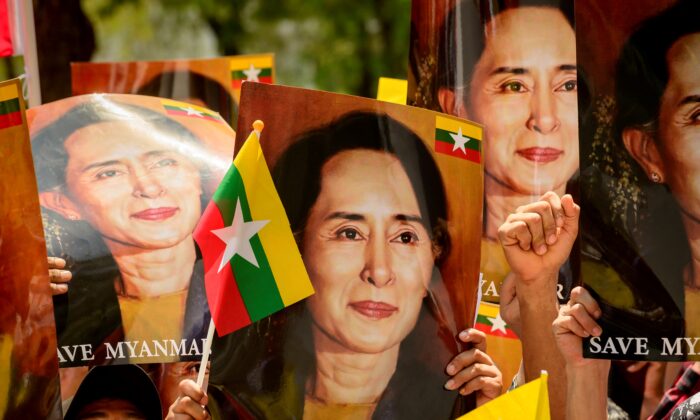 A protester holds a sign with an image of detained civilian leader Aung San Suu Kyi as they prepare to face off against security forces during a demonstration against the military coup in Yangon, Burma, on March 5, 2021. (STR/AFP via Getty Images)
Asia & Pacific

Cambodia has invited the Burmese junta’s defense minister to the Southeast Asian Nations (ASEAN) summit, despite the pleas of hundreds of human rights groups to bar him from attending due to the junta’s atrocities against civilians.

General Nem Sowath, director-general of Cambodia’s General Department of Policy and Foreign Affairs at the Defense Ministry, said on June 17 that all ASEAN defense ministers had been invited to the June 22 meeting.

“As we are the chair for this year, we have mentioned that ASEAN is 10, which makes it necessary to invite all ASEAN members. We also have the consensus from eight ASEAN countries,” Sowath told reporters.

The decision was made despite the demands of 677 regional and international civil society organizations that Mya Tun Oo be barred from attending the ASEAN defense ministers meeting on account of his role in the military regime’s commission of ongoing atrocity crimes.

“In allowing the junta to participate in ADMM, ASEAN is further risking complicity in the junta’s atrocity crimes by providing support and legitimacy to the military and encouraging a military that is waging a nationwide campaign of terror,” they said.

At least 700,000 people have been forcibly displaced since the junta seized power in a coup on Feb. 1, 2021. The troops had killed over 1,900 people and arbitrarily arrested 14,000 people as a result of anti-junta protests.

“As ASEAN defense ministers, we appeal to you to disinvite Mya Tun Oo from ADMM and all future meetings. Engage with the National Unity Government as the legitimate government of Myanmar, and work to resolve the crisis in Myanmar.”

Cambodia is the current chair of the 10-member ASEAN. The bloc has adopted a five-point consensus as a measure designed to restore democracy in Burma (also known as Myanmar).

In January, Cambodia’s Prime Minister Hun Sen went ahead with his trip to Burma and met with military leader General Min Aung Hlaing despite calls from several human rights groups to cancel his trip.

Citing the five-point consensus on Burma, the ASEAN Parliamentarians for Human Rights said on Twitter that Hun Sen’s move to meet with the military regime “undermines ASEAN credibility” and threatens efforts to restore the country’s democracy.