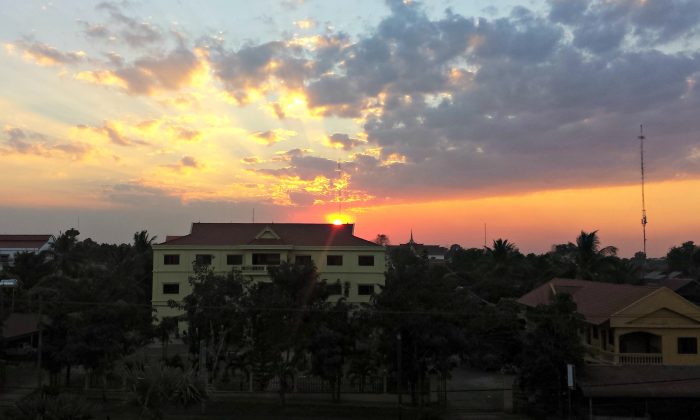 Devastated by civil war, the country has become an international development success story
By Valentin Schmid

CAMBODIA—When a developing country loses a quarter of its population to genocide as Cambodia did, it’s hard to make a comeback. But with the help of the international community, Cambodia is on track to doing just that.

The small Southeast Asian country has had to overcome decades of civil war ending in 1989 and the mass killings of the Khmer Rouge communist regime in the ’70s and ’80s.

“In 2006, the aspirational goal was for Cambodia to halve poverty by 2015,”said Alassane Sow, the World Bank’s country manager for Cambodia. “Cambodia already reached that goal in 2011.” Since 2004, Cambodia has reduced the number of people below the poverty line who earn less than $2.30 per day, from 53.2 percent to 20.5 percent.

It would not have made it without the help of the international governments, private companies, and NGOs.

“Without the international community, the country wouldn’t be anywhere,” said John Paul Dau, VP of operations of Angkor Gold Corp., a Canadian mining company active in Cambodia. It still relies on foreign money, there is little capital and technology, and everything is imported, he said.

Because Cambodia only exports low value-added products such as raw agricultural produce, the country doesn’t generate enough revenue to pay for imports such as cement to build roads or Caterpillar Inc. trucks to transport the cement. Imagine trying to pay for a Caterpillar truck with raw cashew nuts. In addition, the country also doesn’t have access to international capital markets to borrow foreign currency.

Buo Lam, a member of Parliament in Cambodia, said the country is dependent on the international community to facilitate investment.

Investment from countries like Japan, its largest donor with $2.2 billion invested through 2012, have allowed Cambodia to upgrade its commercial sector.

Companies like Angkor have come to Cambodia to conduct business using its new roads and other infrastructure.

Angkor and the other investors are also doing their part to help.

Angkor has helped to build schools and water systems for the villages it operates in, but has made a point of giving Cambodians the opportunity to earn money rather than just giving it away.

“A lot of people give them a handout, not a hand up. You see little kids on the side of the road and you want to help them. It’s human nature to help unprivileged people. You constantly have to be pulling yourself back from that and think: What’s the best for the overall picture,” said Dau.

You constantly have to be pulling yourself back from that and think: What’s the best for the overall picture.
— John Paul Dau, VP of operations, Angkor Gold Corp

The result of this private−public sector cooperation has been good, according to the Cambodian government.

“Since the peace [the official end of the Cambodian-Vietnamese war] in 1991, Cambodia has been moving in the right direction,” said Thuk Kroeun Vutha, secretary of state of the Environment Ministry. “We achieve robust economic growth on an average of 6.7 percent per year. The population is quite young. We opened up our economy.”

“We were able to have support from outside, from foreign countries putting money into our recovery process. Then later on we had foreign direct investment coming from multinational companies and it keeps on coming. Public and private sector money is leading Cambodia in the right direction,” he added.

Growth in 2013 was 7.4 percent, the currency is stable and inflation is low, although annual income per capita is still very low at $950.  The most important sectors are textile manufacturing, agriculture, and tourism, the latter of which is primed to be the No. 1 sector in the years to come. Companies like Angkor or Mesco of India are pioneering commercial mining in the country.

However, in order to graduate from producing and exporting low value-added products, everybody in Cambodia realizes that education for its 15 million young citizens is key. The average age of Cambodians is 22.

“You have a lot of unskilled labor which is a plus, because you have that young labor force. And you are starting to see skilled labor moving in. The colleges are bursting full of people. They are training people in engineering and medicine. There are lots of people going abroad for scholarships. They are coming back, training the people here,” said Dau.

“We know we have a lot of young people and we know education is the passport for the future,” said Thuk.

At least when it comes to primary schools, Cambodia is well ahead of its East Asian neighbors with the highest enrollment rate in the region, according to the World Bank. “We now have a primary school in all the villages,” said Lam.

We know we have a lot of young people and we know education is the passport for the future.
— Thuk Kroeun Vutha, secretary of state, Cambodia's Environment Ministry

In terms of working with Cambodians, Angkor’s chief geologist Kurtis Dunstone sees a major advantage compared to other countries like New Guinea, where he previously worked.

“Here you have a Buddhist culture. It’s chaotic in New Guinea. It’s like Utopia in comparison to work here. The people here are a lot more tolerant and happier. In New Guinea it’s a tribal system, here it’s a collectivist Buddhist culture,” he said.

Despite the great strides, there are still many problems. When it comes to starting a business, the country is still ranked 184 out of 189 countries according to the World Bank, taking an average of 101 days to start a business.

The government is aware of this problem: “We are actively working to improve the infrastructure for the people and new investors,” said Lam.

“We are laying the groundwork: laws, infrastructure, it takes time. Some things just aren’t in place like in a Western country, but you have influence on how that framework gets laid out,” said Dau, whose company has very good relations with the central and local government because of its role in local development projects.

“We are trying to create a good political environment for investors, we want to protect them,” said Buo Lam.

In order to create this positive environment, Cambodia has to tackle the problem of corruption.

A senior business executive who spoke on the condition of anonymity in Cambodia’s capital Phnom Penh, said “corruption is everywhere” and “it’s worst in the Anti-Corruption Bureau.”

She said the main problem is the use of land, which has been transferred from small farmers to big international companies, like Vietnamese companies Hoang Anh Gia Lai and the Vietnam Rubber Group, according to Global Witness, a London-based NGO active in Cambodia for 20 years.

With respect to the rule of law, the business executive said: “You can’t win if you don’t have money, sometimes the lawyer is just an intermediate between you and the judge.”

The country passed more stringent corruption laws in 2010 but the U.S. Department of State still found corruption was the biggest deterrent for business in 2013 and think tank Transparency International ranks Cambodia among the 20 most corrupt countries in the world.

Regardless, MP Bam Luo is proud of what the country has achieved in the recent past: “The place you are sitting in now was the stomping ground of elephants just recently. Now we have many buildings and roads.”