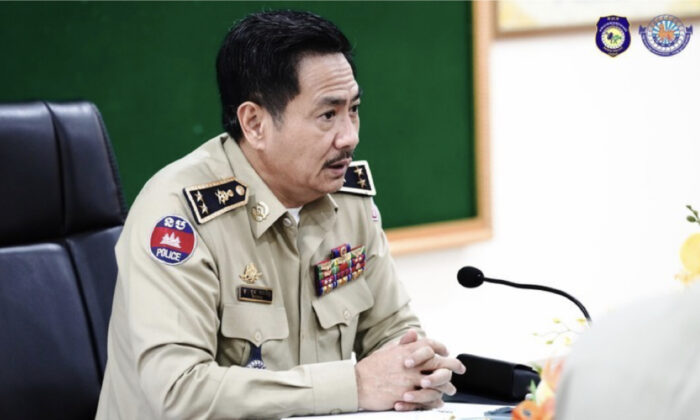 Zun Nalin, police chief of Sihanoukville, stressed that the authorities will continue to crack down on online gambling and human trafficking. (Photo from 2020 by Westport Police Department)
HK Current Affairs

On Aug. 27, 2022, NowTV reported that Cambodian authorities captured 60 suspected criminals, and rescued 865 survivors from human trafficking groups who are foreign nationals. In the past week, nine Chinese men and two Cambodian men have been arrested for running criminal activities, human trafficking, forced labor, and selling women to different buyers.

Hong Kong police arrested five males and females, who are suspected to be the key members of human trafficking Hongkongers on Aug 25.

In a meeting with the Fight Crime Committee on Aug. 26, Secretary for Security Chris Tang Ping-keung defended an allegation of experts believed the Hong Kong Police Force is not doing enough to collaborate with Cambodian law enforcement or prevent human trafficking in Hong Kong.

In response to collaborating with foreign law enforcement, Tang answered, “In fact, we also have robust cooperation with overseas law enforcement agencies either on a bilateral basis or through the Interpol channel to tackle those causing cross-jurisdictional offenses.”

These criminal organizations permeating Cambodia, Vietnam, and the Philippines, would kidnap their victims, and hold them, hostage, before torturing them into forced labor or sexual exploitation in their scam organizations. These offenders also commit organ harvesting and selling human body parts to the wealthy and on black markets.

Hong Kong Police Force has received 36 rescue requests thus far. Of the 36 cases, 32 are male and four are female between 19 and 50-year-old. On Aug. 22, Hong Kong Police only confirmed the safety and whereabouts of 22 victims but suspected them to be in confinement. Eleven of the scam survivors have returned to Hong Kong without harm. However, the authorities have lost contact with nine victims.

Taiwanese Senior Social Journalist Dai Zhiyang, did an exclusive interview with Info Times, to reveal some of the darkest secrets in these Cambodian fraud organizations. He also analyzed how human trafficking and organ harvesting become more rampant.

What Is the KK District?

Multiple news reported that when human trafficking criminals kidnap their victims, they would be transported to a location called KK Park District, in Myanmar as a final designation before being killed or taken to nearby countries in South East Asia.

The KK Park District is a mega campsite of fraudsters and human traffickers in Miaowadi, Myanmar. The Park is controlled by the Karen National Liberation Army (KNLA) but run by human traffickers. Close to the Moai River in Thailand, Cambodia Mae Sot Airport is only about 12 minutes drive to the Miaowadi area. The short distance makes the KK District a perfect and most ferocious place for the across-country crimes of trading humans and organs.

The setup of the KK District is like a private estate. It has shops, hospitals, and restaurants but is also full of illegal activities, such as prostitution, drugs, gambling, and pornography. Armed guards station in The ‘military department’. The military department is where the criminals send victims if they don’t obey or fail to meet their scam expectations.

Taiwanese News Program SET Hotline News, reported that victims with no more value are taken to the KK Park District as their final destination. Victims hop on a boat before criminals sedate them with anesthesia before cutting them open. They will then take functional organs while the victim is still alive. That explains why bodies would wash up on shore in villages. The criminals would dump the bodies into the river after they take what they need. The harvested organs will be placed in an ice box and sold to Dubai via Thailand.

Military police make it hard for foreign affairs to get involved.

After media outlets exposed the news of Cambodian organized crime groups’ human trafficking of Taiwan and Hong Kong citizens, the crime groups had to change their tactics to try to stay out of the spotlight. The Global Anti-scam Organization (GASO) members said Thailand has become a pitstop for the criminals of human trafficking and organ harvesting.

Cambodia, Myanmar, Westport, and Thailand are only a river apart.

Dai said, “If the victims do not do as they are told, instead of torturing them for days in the base camp, the criminals will resell the victims immediately to organ harvesters.” Victims’ retinas, kidneys, and hearts, will be removed one by one until there is nothing left but skin and bones.

What Role Do the Cambodian Authorities Play?

Dai pointed out that everything is about money. Corruption is a norm in law enforcement, “Double crossing often happens among the criminal groups. If a victim is missing from a crime organization, they would call the police for help. The police get hefty payouts for ‘helping’ as well as snitching to whichever crime groups have snatched the victim.”

He said that Cambodian military police are accomplices in human trafficking and organ harvesting. Dai also explained, “Taiwanese gangs and triads are now also part of these human trafficking operations since the criminals are unable to find mainland Chinese victims. Taiwanese gangsters will tip off who to kidnap. For example, someone who owes them money or someone who is desperately in need of financial assistance.”

Dai said, unfortunately, only social civic, or non-governmental groups might have a shot at rescuing the victims.

Victims usually are sent into prison-like buildings where they are confined. Electric barbed wires are threaded on every wall, making it impossible to escape.

The news reporter said, a Chinese man named Yang, was heading to Thailand in December 2021 but was kidnapped en route and taken to the KK Park District. Yang asked the criminals how much they wanted in exchange for his freedom.

Yang was sent to work as a scammer in the district from 9 p.m. to 2 p.m. the following day. The journalist reiterated Yang’s experience, “Each person was given a scam goal. (the number of people you have to scam each day). If the captives don’t meet the target, then they will be physically punished after 17 working hours. Yang wanted to escape. He managed to call the police station back home in China.”

But no one could help him. The police station and embassy staff told him that the KK Park District is outside their jurisdiction. Yang eventually was captured and returned to the District again, he was then beaten and waterboarded naked.

The host mentioned the Global Anti-scam Organization (GASO), an NGO that fights against online scams and crimes. “GASO admitted that it is almost impossible for them to make rescues in the KK District or in Myanmar. They suspect that there are still about 5,000 people trapped inside.” The anchor pointed out.

Jason, a GASO member, warned the Taiwanese about the four main scam criminal districts around Thailand. “The first one is the KK Park District. Criminal organizations are everywhere in northern Burma. The third one is the Golden Triangle of the Economic Zones in Laos which were developed and led by the Chinese.” Jason added that the special economic zones are full of casinos, where the scam organizations are located.

The fourth is Cambodia. Jason said most of the crime groups are organized by the Chinese. The criminals had been smuggling their victims from Yunnan until the pandemic hit. China’s Zero-COVID policy means no one could get in or out of the country. The criminals could no longer find their targets in China. So they changed where they found their next victims: Taiwan, Malaysia, and Hong Kong.

What is human trafficking?

A member of GASO, Ms. Anna, (pseudonym), said although they were able to rescue one of the Hong Kong females who were in Cambodia, there has not been a successful rescue from northern Cambodia.

The Global Anti-scam Organization has been investigating and cracking down on cybercrime and human trafficking companies in South East Asia since June 2021. ‘

Ms. Anna said, “Since Cambodia is ruled by the army, many of the official establishments have been bribed by criminal organizations, which makes the rescue mission even more difficult.” She explained traffickers target Taiwanese and Malaysian due to their ability to speak Mandarin. In Burma, criminals are mostly from Fukien [in South East China] who have settled and are running gambling businesses. They also target Hongkongers because of their Cantonese and English comprehension allowing the criminals to expand their crimes worldwide.

Macau casino businesses have been affected by the ongoing pandemic, and many people have lost their jobs or been made redundant. Criminals saw it as an opportunity and began to mass-advertise on social media. Their plan was to lure the unemployed to Cambodia for non-existing ‘high-paid jobs at various casinos’. Most casinos in Cambodia are run by mainland Chinese due to the Belt and Road Initiative.

It doesn’t matter where victims are from. Once they become captive, they usually end up as forced labor in criminal fraudulent activities. Females can also be forced to be prostitutes and hotel escorts. If they fail to meet the given ‘sales target,’ victims will receive physical torture such as electric shocks, beating, and even rape.

According to Ms. Anna, female victims will also be injected with hard drugs such as heroin. These victims usually become substance addicts after a while.

Listed on the GASO website, a female victim from Sichuan Province, China, became mentally unstable and was found wandering naked, with bruises all over her body around near the Cambodian border. She was also suspected to be one of many human trafficking victims.

Ms. Anna said, “Some female victims, therefore, suffer from mental disorders, suicidal thoughts, and drug overdose.” One of the victims overdosed when the GASO volunteer team found her just in time.

Sexual Assault Is Not Exclusive to Females

Criminals usually abandon their victims if they become too mentally sick, hysterical, and no longer any use to their business.

Thailand and Cambodia are only pit stops before victims arrive at KK Park District. Some will be sent to Dubai for organ harvesting. Criminals sell organs to sick rich businessmen so they can extend their lives.

Ms Anna detailed one of GASO’s horrifying cases, “A son of a Taiwanese businessman was kidnapped and brought to Dubai. The father paid five million dollars for ransom. However, his son still ended up dead because a rich Dubai tycoon paid 3 times more than he did, a total of 15 million dollars for his son’s organs.”

There Is a Price Tag for Every Body Part

Skin is sold starting at US$1 per square centimeter.

Hundreds of dead bodies were discovered on a riverside in a small rural Burmese village. The bodies were suspected to have drifted after being dumped from organ harvesting.

Since February 2022, the Taiwanese authorities have been receiving help requests from victims of fraudulent kidnapping and human trafficking. A human trafficking organization posed as a gambling business and lured five Taiwanese to Cambodia before being forced to work for its scam calling centers.

While Taiwan has been proactive in rescuing its citizens from Cambodian criminals, Hong Kong Police is taking another approach. Security Bureau representative said at a news conference, “We encourage the kidnapped victims to seek help through our app, WhatsApp hotline, or by filling out a form.”

The public questions, “How will a kidnapped victim have time to fill out a form or download an app so someone can save them?”

Ms. Anna also disapproved of Hong Kong authorities’ logic, “How? Fill in a form. There is no way. The victims might die if they are found trying to escape or get help.” Ms. Anna also said GASO tried contacting the Hong Kong police for six months but no actions were made until recently.