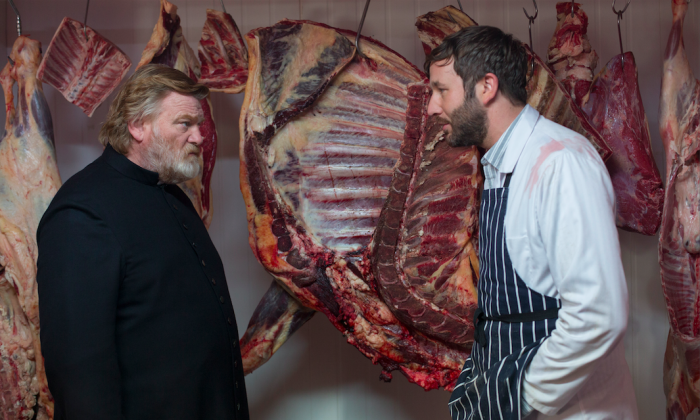 Whenever we see a picturesque Irish village with a curmudgeonly priest, we are conditioned to automatically think quaint little comedy—the kind in which old people might get naked.

This will be a much darker affair. Reuniting with Brendan Gleeson, “The Guard” helmer John Michael McDonagh offers a sober meditation on faith, sacrifice, and forgiveness in “Calvary.”

Father James Lavelle was called to the priesthood late in life, after his divorce. Considered a good man by those who know him, he is completely innocent of the church’s abuse scandals. Yet, that is precisely why a grown victim announces in confessional his intention to kill the upstanding father.

Murdering a compromised priest simply would not have the same jarring effect as killing Lavelle. With the one-week deadline looming, Lavelle sets out to find the disturbed parishioner among his shockingly jaded flock.

Perhaps fortuitously, Lavelle will also have to deal with his 20-something daughter, who has come to recuperate from another suicide attempt. They will have some unusually serious and heartfelt discussions throughout the course of the film, even though Father Lavelle never reveals the death threat hanging over his head.

However, McDonagh does not use the confessional seal as a thriller device. Since the mystery man never asks for absolution, Father Lavelle is free to seek the counsel of his bishop and the local dodgy police inspector. Yet, for various reasons, Father Lavelle is determined to handle the matter personally.

Given the title and the clock ticking down to Sunday, the symbolism of “Calvary” is almost crushing at times. Nonetheless, its exploration of religious conviction is exceptionally mature and thoughtful.

Father Lavelle is a good man, but hardly a saint. In contrast, the village is almost shockingly contemptuous of his relative virtue. If the church’s problematic response to the notorious rash of abuse scandals is the lighter fluid that ignites “Calvary,” the moral bankruptcy of the increasingly agnostic village is the kindling that keeps it ablaze.

Throughout the film, Brendan Gleeson is pretty much perfect as Father Lavelle, delivering gruff one-liners, while facing a series of almost Biblical trials with palpable dignity and resolution. It is a salty yet mostly understated turn that might represent a career pinnacle.

Likewise, Kelly Reilly is absolutely devastating in her big scenes as his daughter. They are backed up by a diverse supporting cast, including the likes of M. Emmet Walsh and Orla O’Rourke, who always convincingly look and act like members of the dysfunctional provincial community.

At the halfway point, “Calvary” seems rather overstuffed with subplots and side characters, yet nearly each and every one pays off for McDonagh. It might sound like an opportunist broadside launched at the church, but its depiction of the good priest is remarkably sympathetic and nuanced.

In fact, McDonagh maintains a tone much more in keeping with Bresson’s “Diary of a Country Priest” or Jean-Pierre Melville’s “Léon Morin, Priest” than the churlish score-settling of “Philomena.”

Highly recommended (especially to those most inclined to be suspicious of it), “Calvary” opens at the AMC Lincoln Square 13.