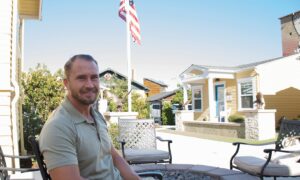 Caltrain at Board of Directors Meeting, Electrification and Railroad Alignment

Caltrain met with the San Mateo County Transit District (SamTrans) Board of Directors on August 2 to discuss and provide updates on the Peninsula Corridor Electrification Project (PCEP), rail alignment, and benefits study.

PCEP was first planned in 1999 and achieved environmental clearance in 2015. According to the project fact sheet the electrification infrastructure construction began in 2017 and is expected to be complete by 2020.

The board of directors meeting on August 2 sought to provide updates and hear public comments on the project’s process. SamTrans Board of Directors, Caltrain, and San Francisco representatives were present, along with local residents.

As said during the meeting, PCEP is aimed at electrifying the Caltrain Corridor from San Francisco’s 4th Street and King Street Caltrain Station to approximately the Tamien Caltrain Station. The current diesel-hauled trains will be converted to Electric Multiple Unit (EMU) trains that will increase both the speed and the number of trains running along the tracks.

The first electric trains are expected to arrive in late 2019.

From 2008 to 2018, Caltrain has also been working on the Positive Train Control (PTC) Project, which is aimed at equipping the Caltrain corridors with an advanced signal system and federally mandated safety technology. This project had a budget of $231 million of which $202 million has been spent. Looking forward to 2018 through 2020, the project has an expected budget of $89 million.

“This project is what we call a FTA New Start project, so it’s a competitive procurement where we compete for funds with other agencies throughout the United States,” explained Funghi.

The cost of these projects is spilt between federal grants, Prop 1A, Prop 1B, and local funding.

The PCEP and PTC projects are all part of the CalMod program, which will modernize and update Caltrain to accommodate the current needs and demands as society continues to change.

Most of the project construction occurs at night in order to minimize disturbances for surrounding residents and businesses. Commuters are still able to access and ride Caltrain as part of their regular commute.

In addition to electrifying the Caltrain Corridor, Caltrain is working with San Francisco’s Transportation Planning Department to align Caltrain with the Salesforce Transit Center.

This is an effort to bring Caltrain and High Speed Rail to the Salesforce Transit Center while connecting San Francisco’s fastest growing neighborhoods on the east side of the city. The railroad alignment project is still in the planning and developmental stages.