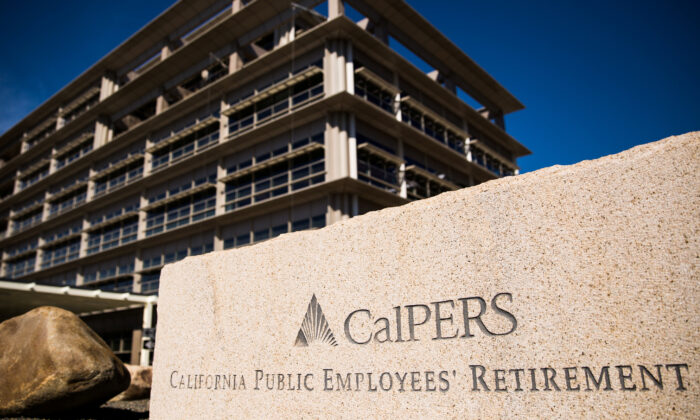 “Tumultuous global markets played a role in CalPERS’ first loss since the global financial crisis of 2009, as the System today announced a preliminary -6.1% net return on investments for the 12-month period that ended June 30, 2022. Assets stood at $440 billion at the end of the fiscal year.”

The 72 percent funding level is especially dangerous. Although some investment advisers say 80 percent is adequate, according to an October 2021 report by the American Academy of Actuaries, that’s a “myth.”

“The funded ratio of a pension plan equals a value of plan assets divided by a measure of the pension obligation as of the same date. … Actuarial funding methods generally are designed with a target of 100 percent funding—not 80 percent,” the academy stated. “If the funded ratio is less than 100 percent, actuarially determined contributions are structured with the objective of attaining a funded ratio of 100 percent within a reasonable period of time.”

CalPERS has no such reasonable plan.

“You have a few good years. Invariably, it’s followed by a bad year,” former state Sen. John Moorlach told me; I served as his press secretary. He also served as an Orange County supervisor and treasurer-tax collector. “It’s cyclical. It can’t go straight up. That’s impossible. The market can only give you what it gives you.”

“So they just stay with their portfolio,” he said. “If they went into cash to avoid losses, they would get fired. They don’t believe in style drift.”

“Style drift,” according to Investopedia, “occurs when an investment portfolio’s allocation diverges significantly from its intended allocation.”

“In the Senate, I tried to do a bill for CalPERS to do short sales,” Moorlach said. “It was to take advantage of a declining stock market. They didn’t want me to do that bill. They were adamant. If all you’re going to do is buy and hold and not anticipate cycles, then why are we paying Chief Investment Officer Nicole Musicco more than $1 million a year?”

PIOnline reported in February, just after she was hired: “New CIO Nicole Musicco’s annual base pay will be $707,500. She’ll be eligible for an annual incentive of up to 150% of her base salary.”

Potentially, Musicco could earn $1.77 million in a good year.

It does seem odd that CalPERS would reject the option of using a common investment tool, short selling, which is used even by personal investors. Indeed, a couple of my friends actually did that early this year, just before the Federal Reserve started increasing interest rates, by selling their homes at the value peak. For a couple years, they had been planning to leave expensive California for states with lower costs, including those imposing no state income tax. They waited until they saw the massive inflation begin hitting, which guaranteed interest rates would rise, and sold right then.

Allowing short-selling would have meant that CalPERS could have taken advantage by “shorting” investments sensitive to interest-rate increases.

The CalPERS downturn isn’t just numbers but will have a direct effect on the city, county, and other public employees contributing to the system.

“They will have to pay increased contributions to CalPERS,” Moorlach said. “It’s called ARC—annual required contributions. If we’re going into a recession, there will be some tough times ahead.”

Those added contributions will be on top of the inflation all of us are paying, currently at a 9.1 percent annual rate.

In turn, that will lead to union demands for higher pay for public employees.

“That’s ironic because, during a recession, there also will be less money,” Moorlach said. “New hires will have to be let go to make room for the existing staff to get the higher pay. This shows how CalPERS performs in its portfolio is critical to the well-being of plan sponsors [meaning the cities and counties]. It’s a case of the tail wagging the dog.”

It also means taxpayers again will be asked to pay more for the same services or even reduced services.

And there could be cities and counties declaring bankruptcy, as San Bernardino and Stockton did a decade ago during the subprime recession.

But even bankruptcy won’t let taxpayers off the hook.

“CalPERS is a coercive force,” Moorlach said. “When San Bernardino was thinking about modifying its pension plan, CalPERS told them, ‘We have X amount of money, and our attorneys will fight that attempt.’”

All this stems from the “pension spiking” of the late 1990s, when the runup in stocks during the Dot-Com boom led the Legislature to allow pension funds to increase payouts by 50 percent. I remember the unreal euphoria of that era, where the refrain was, “The business cycle has been repealed.” I wrote many editorials insisting, instead, “The business cycle has not been repealed.”

The follies of that era continue to plague the state.