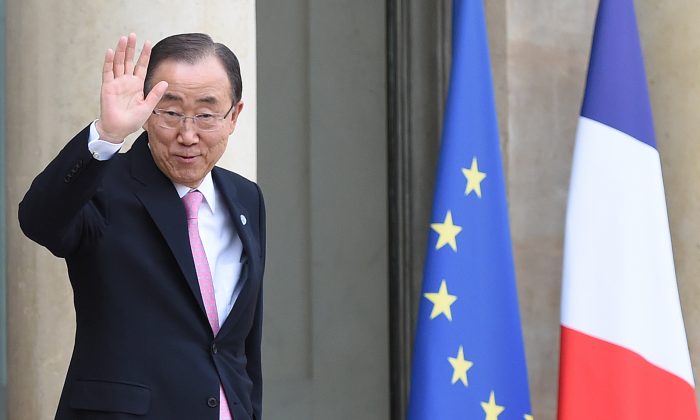 Secretary-General of the United Nations Ban Ki-moon leaves following a meeting with the French President on Nov. 29, 2015, at the Elysee palace in Paris. Some 150 leaders including will attend the start on Nov. 30 of the U.N. conference on climate change, tasked with reaching the first truly universal climate pact. (Stephane de Sakutin/AFP/Getty Images)
International

PARIS—Empty shoes were lined up in downtown Paris ahead of the start of international climate negotiations Sunday, filling in for global warming protesters who were not permitted to march because of security after this month’s attacks. Instead environmental advocacy groups held marches outside of Paris and around the world.

A nearly empty conference center seemed to have more security guards than negotiators as country delegations and media started dribbling into the venue where two weeks of intense talks are expected.

Formal negotiations between lower level officials are scheduled to begin late Sunday. On Monday, more than 140 leaders are expected to arrive, including leaders of the United States, China and Russia, to talk about their commitment to fight climate change and reduce ever-rising carbon dioxide emissions.

The climate negotiations happen as weather officials across the globe proclaim that this is the hottest year on record. And they say that Earth has crossed some significant thresholds in climate. The world has warmed by about one degree Celsius (1.8 degrees Fahrenheit) since pre-industrial times and carbon dioxide levels now are pretty much permanently above the 400 parts per million mark, scientists say.

The burning of coal, oil and gas spews heat-trapping gases that not only make the world warmer, but cause other changes in storms, rain, drought and even timing of biological life, scientists say.

Armed security was noticeable nearly everywhere at the Le Bourget center where negotiations will take place. The Le Bourget center formally became a temporary United Nations site in a ceremony Saturday in which French foreign minister Laurent Fabius, who is president of the summit, handed over the keys to the site to U.N. climate chief Christiana Figueres.