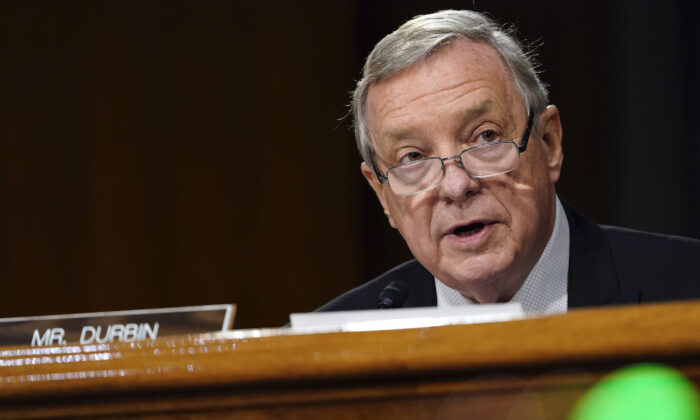 In an interview with “Fox News Sunday” on July 10, Sen. Dick Durbin (D-Ill.), the chairman of the Judiciary Committee, brushed off efforts by some left-wing agitators and lawmakers to impeach Supreme Court Justice Clarence Thomas.

A petition begun by MoveOn, a left-wing nonprofit advocacy group, has garnered more than one million signatures in the past three months, particularly in the wake of the SCOTUS decision to reverse Roe v. Wade and return the power to regulate abortion to the states.

“As to whether he’s going to be impeached, that is not realistic, but he should show good judgment,” Durbin said about Thomas. “If this court is going to be credible, it has to be as apolitical as possible. Exactly the opposite has been happening.”

Initially, the MoveOn petition focused on Thomas’s alleged connection to the so-called “insurrection,” a term that has been blasted by conservative critics as a dishonest description of the Jan. 6 Capitol breach.

Specifically, left-wing activists have taken issue with texts exchanged between Thomas’s wife, Ginni Thomas, and then-White House Chief of Staff Mark Meadows, as well as Thomas’s sole dissenting opinion in an 8–1 ruling stating that President Donald Trump could not block the House Jan. 6 panel from accessing documents related to the Capitol breach.

Although he rejected calls to impeach Thomas, Durbin did echo others in his party stating that Thomas should recuse himself from all matters related to Jan. 6.

In the wake of the Supreme Court decision to overturn Roe v. Wade, MoveOn updated the petition to include a reference to abortion.

The petition continued, “Thomas’ [sic] failure to recuse himself warrants immediate investigation and heightened alarm. And it’s only the latest in a long history of conflicts of interest in the service of a right-wing agenda and mixing his powerful role with his conservative political activism. He has shown he cannot be an impartial justice and is more concerned with covering up his wife’s coup attempts than the health of the Supreme Court.”

“He must resign—or Congress must immediately investigate and impeach,” the petition ends.

In a tweet posted after the petition broke one million signatures, MoveOn Executive Director Rahna Epting wrote, “Justice Thomas is clearly compromised and we are now over 1 mill [sic] strong calling for his impeachment.”

Other left-wing progressives, including Rep. Alexandria Ocasio-Cortez (D-N.Y.), have joined in calls to impeach Thomas and other conservative SCOTUS justices who voted to overturn Roe v. Wade.

Impeaching and actually removing Thomas from the Supreme Court would be a tall order for Democrats, as Durbin suggests, and would be all but doomed to fail in the Senate.

To remove a federal judge, the House of Representatives must bring charges against a judge or justice and a majority of members in the lower chamber must vote to impeach. Because they currently hold the House by a paper-thin margin, Democrats could potentially pass an impeachment resolution, as they did against Trump on two occasions with a handful of GOP votes.

In the case of Thomas, some Republicans, notably Reps. Liz Cheney (R-Wyo.) and Adam Kinzinger (R-Ill.)—the only two Republicans on the Jan. 6 panel—could possibly join Democrats in voting for Thomas’s impeachment.

However, in the Senate, where a two-thirds supermajority is required to remove a judge, Democrats would need to win at least 10 GOP votes, a highly unlikely scenario given the prevailingly positive attitude toward Thomas among Republicans.

Any efforts to remove Thomas would likely amount to a symbolic gesture of disapproval by House Democrats, and would be unlikely to develop into further action.