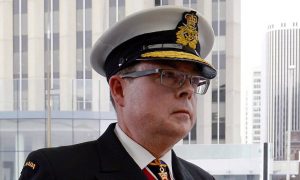 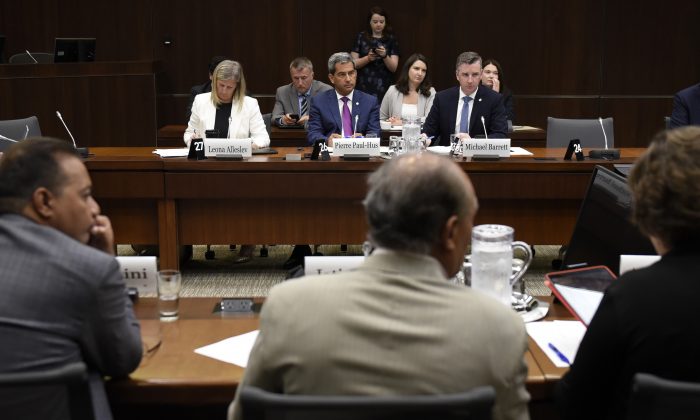 Conservative MPs Leona Alleslev, Pierre Paul-Hus and Michael Barrett sit across from Liberal MPs before an emergency meeting of the Standing Committee on Foreign Affairs and International Development to discuss a request to undertake a study of undue pressure on former career diplomats, in Ottawa on July 30, 2019. (Justin Tang/The Canadian Press)
Canada

Calls to Former Diplomats Were Not Meant as Pressure, Liberal MPs Insist

OTTAWA—The choice to reach out to two former ambassadors to China was part of an effort to make sure experts were sufficiently informed, not to pressure them into toeing the line, Liberal MPs said Tuesday as they shut down opposition efforts to investigate the matter.

Members of the governing party who comprise a majority on the Commons foreign affairs committee were on hand to fend off allegations that the Prime Minister’s Office had attempted to pressure two former ambassadors to China over their public statements about Canada’s ongoing dispute with the Chinese regime.

David Mulroney and Guy Saint-Jacques told The Globe and Mail newspaper last week they had been contacted by an official from Global Affairs Canada. Mulroney said the official had asked him to check with Global Affairs before making future comments on China and that the request had come from the PMO.

Prime Minister Justin Trudeau has insisted his office did not direct the department to silence the former diplomats.

During Tuesday’s special summer meeting of the committee, Liberal MPs framed the calls as part of the government’s practice of consulting with experts and trying to enable an informed discussion.

Liberal MP Rob Oliphant, parliamentary secretary to the foreign affairs minister, said the contact with the two former ambassadors was part of an effort to ensure Canadians were speaking “with an informed voice,” but not “one voice.”

Liberals on the committee shot down an opposition motion that would have summoned Foreign Affairs Minister Chrystia Freeland, the two former ambassadors, and other witnesses to testify.

Conservative members had joined with Guy Caron, the NDP MP on the committee, to push for the investigation in order to shed light on Liberal efforts to end Canada’s deepening diplomatic row with China, and help Canadians understand if the government had tried to “muzzle” two diplomats.

Conservative critics Leona Alleslev said invoking the PMO in a conversation with a former public servant was a “not-so-veiled threat.”

“It’s a way of communicating a severity and a seriousness to the conversation, and that they would like you to behave in a certain way,” she said before the meeting. Later, during the proceedings, Alleslev laid out the Conservative argument for an investigation.

The prospect of private citizens being pressured by the government is a free speech issue, and a committee investigation would provide a necessary check on government power, she said: “The very fabric of Canada’s democracy is at risk.”

Throughout the day, Conservatives frequently described the calls to the former diplomats as part of a “pattern of behaviour” for the Liberal government, attempting to link it to the SNC-Lavalin affair and the trial of Vice-Adm. Mark Norman.

Addressing the issue following the defeat of the motion Tuesday, Conservative Leader Andrew Scheer said the government “once again stands accused of political interference” and was trying to cover it up.

“He abuses the power of his office to reward his supporters and silence his critics,” Scheer said of Trudeau. “He will trample on our democratic principles and the rule of law in order to win elections and hang on to power.”

The two parties clashed throughout the day, accusing each other of playing politics on the eve of an election campaign. Liberals called on Canadians to rise above politics in order to secure the return of Michael Spavor and Michael Kovrig, the two Canadians being held in China, and to help safeguard the livelihoods of farmers and others imperilled by deepening trade conflicts.

Conservatives countered that it was in fact the Liberals who were attempting to play politics with the file, and that if the government had done nothing wrong, they should be open to an investigation.