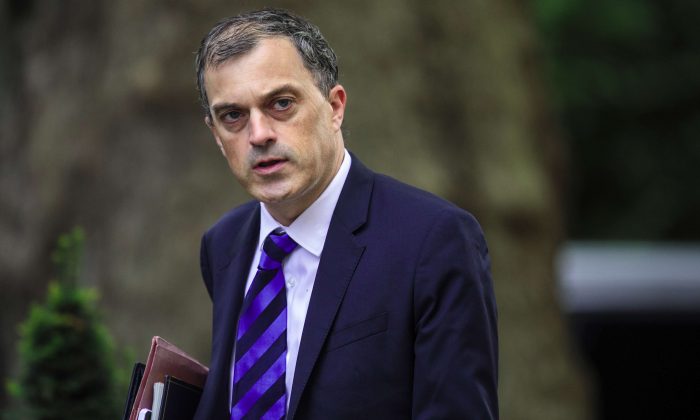 LONDON—Brexit has already strained Britain’s patchwork constitution and archaic conventions at the seams, variously pitting the roles of Parliament, the Supreme Court, the House of Lords, and the government against one other.

Now, an old parliamentary convention known as “vote pairing” has been dragged into the fray, with the government chief whip accused of “cheating” on a key piece of Brexit legislation.

Julian Smith, the Conservative chief whip, is facing calls to resign and criticism from within his own party, after allegedly urging lawmakers to abandon a convention to ensure fair voting on legislation that the government won by a margin of only 6 votes.

The vote was on an amendment to Brexit legislations that directly challenged Theresa May’s Brexit plans. Many commentators believe a defeat would have triggered a vote of no confidence in her leadership.

In the end, only one MP broke the convention, but various sources allege Smith had encouraged other MPs to break with “vote pairing.” They refused.

Vote pairing allows lawmakers to be absent from chambers—for reasons such as illness, or more latterly maternity leave—but without affecting the outcome. A lawmaker on the opposition agrees to be paired with them, and not vote, to keep the overall balance fair.

For the key votes on the Brexit legislation, eight Conservative MPs should have abstained after pairing.

On Tuesday, July 17 Conservative Party Chairman Brandon Lewis had been paired with Jo Swinson, a Liberal Democrat MP who was on maternity leave. He appeared to uphold the convention for various earlier votes, but on the key Brexit votes, he broke the pairing, voting in the government’s favour.

On discovering that Brandon had voted, Swinson wrote on Twitter, “Don’t try any nonsense about a mistake—this is calculated, deliberate breaking of trust by government whips to win at all costs. Brandon abstained in afternoon divisions, but voted in the two crunch votes after 6pm. There’s a word for it—cheating.”

Smith claimed that it was an “honest mistake,” an explanation backed on Friday by the prime minister.

“Jo I am v sorry—I spoke to your CW earlier,” he tweeted on July 17. “A mistake—we pair consistently 4 pregnancy pairs. Brandon Lewis was asked to vote in error.”

But according to a later report in the Sun, up to five MPs were approached to break their vote pairing, with Smith demanding to know why one of them ignored his instructions.

The Times reported on Friday that the chief whip had urged three Tory MPs to break their pairings.

Robert Peston, ITV’s political editor, also said a “well-placed source” had told him a backbencher was texted by chief whip with instructions to break pair on Tuesday night.

According to the Times, Smith told the opposition whip he did intend to break the pairing, but would have chosen a different pair if he had known it was Swinson on maternity leave.

At the time of writing, Smith had yet to respond to the allegations in the Times and the Sun.

“This reflects pretty badly on those peddling the ‘honest mistake’ nonsense,” wrote Swinson in a Tweet. “To be fair, hats off to the two MPs who told their chief whip to take a running jump when he asked them to break a pairing just because the govt might lose.”

Conservative commentators also expressed concerns over Smith’s actions with some calls for him to resign.

“Beneath the adversarial public performances, Westminster runs on trust,” he wrote. “The pairing system might seem arcane but it is a crucial part of how our Legislature functions, allowing MPs with pressing commitments elsewhere—be they government business, an illness, or a young child—to miss votes without letting down either their electorate or their party.”

“The pairing system is sacrosanct. If it collapses the Government faces the prospect of having to keep every last MP—including the Democratic Unionists, over which it has no direct authority at all—as close to London as possible at all times.”

According to the Times one former Tory Cabinet minister said Smith should resign. “Their behaviour is an affront to the very rules of conduct we have in our parliamentary democracy. They have both lied and have abused their positions in government to save their government jobs. They have brought into question the integrity of parliament and this government through such appalling conduct.”

The deputy leader of the Labour Party, Tom Watson also called for Theresa May to sack Smith.