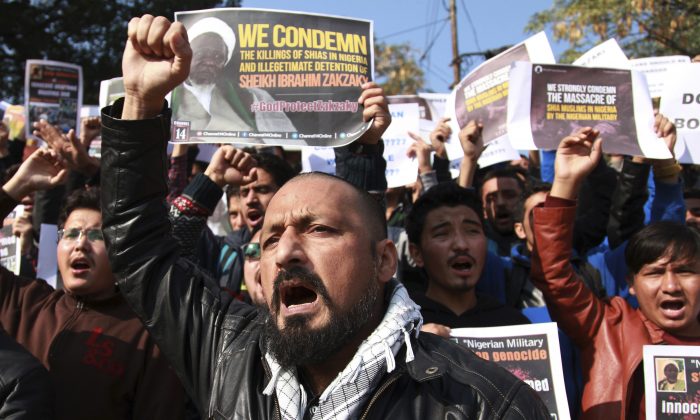 Muslims students carry placards and shout slogans against the Nigerian government against the killings of hundreds of Shiite Muslims and detaining their leader Ibraheem Zakzaky in Nigeria, in Jammu, India, Tuesday, Dec. 1 5, 2015. (AP Photo/Channi Anand)
Africa

Calls for Investigation After ‘Massacre’ in Nigeria

LAGOS, Nigeria—Human rights advocates have called for an investigation following the Nigerian army’s raid on a Shiite sect in which hundreds of people were reportedly killed.

Details of the weekend violence in Zaria have been slow to emerge, with the three attacked areas of the northern town on lockdown as late as Tuesday, with no one allowed to enter or leave.

Amnesty International said in a statement late Tuesday that the shooting of members of the Shiite group in Zaria “must be urgently investigated … and anyone found responsible for unlawful killings must be brought to justice.”

“Whilst the final death toll is unclear, there is no doubt of that there has been a substantial loss of life at the hands of the military,” said M.K. Ibrahim, director of Amnesty International, Nigeria.

The bloodshed was yet another blow to Africa’s most populous nation, already beset by a 6-year-old insurgency waged by Boko Haram, a violent Islamic group which is at odds with the Shiites and others who oppose its extremist views.

Spokesman Ibrahim Musa of the Shiite Islamic Movement in Nigeria said soldiers on Monday carried away about 200 bodies from around the home of the head of the sect, Ibraheem Zakzaky — who was himself badly wounded and whose whereabouts have not been disclosed by the authorities — and hundreds more corpses were in the mortuary. Human rights activists said hundreds of people, perhaps as many as 1,000, were killed.

The army said troops attacked sites in Zaria after 500 Shiites blocked the convoy of Nigeria’s army chief, and tried to kill him on Saturday. A report from the military police said some Shiites were crawling through tall grass toward Gen. Tukur Buratai’s vehicle “with the intent to attack the vehicle with (a) petrol bomb” while others “suddenly resorted to firing gunshots from the direction of the mosque.”

In a statement Monday, the army said there was “loss of lives as a result of the Shiite group members blocking roads and not allowing other passers-by to go about their lawful businesses and activities,” and added that “as soon as order is restored … the police will conduct an enquiry and the public will be informed.”

Chidi Odinkalu of the Nigerian Human Rights Commission called the attacks “a massacre.” The army said it has asked the rights commission to investigate the alleged assassination attempt on the army chief.

Odinkalu told The Associated Press that Zakzaky suffered four bullet wounds and that one of the sect leader’s wives was killed in raids that began Saturday and ended Monday morning. He was quoting the family doctor. Two of Zakzaky’s sons also were killed and one was wounded, according to Musa.

Iran, seen as the guardian of the Shiite Muslim faith, condemned the killings.

Hundreds of Shiites protested in front of the Nigerian embassies in the Iranian and Indian capitals on Tuesday.

Nigeria’s Shiites, a movement of millions started 37 years ago by Zakzaky, who dresses in the robes and turban of an Iranian ayatollah, often have clashed with police and other security forces over their unlawful blocking of major roads to hold religious processions.

Nigeria’s military is infamous for its excesses. In 2009, Nigerian armed forces attacked Boko Haram’s headquarters and killed about 700 people, including its leader.

The Shiites two weeks ago suffered a suicide bombing in a procession that killed 22 people. Boko Haram, a Salafist group, claimed responsibility for the attack and threatened to “wipe out” the Shiites opposed to its radical vision of Islam.