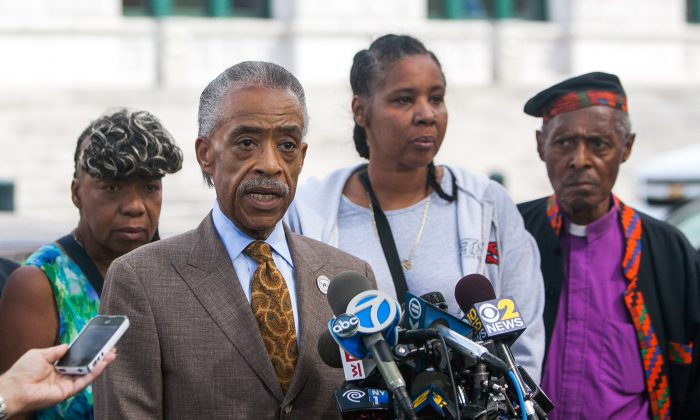 Calls for Calm Ahead of Staten Island Rally in NYC

NEW YORK—A highly-anticipated march and rally on Saturday on Staten Island has been preceded by days city leaders, including the mayor, urging for calm.

The event is expected to draw at least 3,000 people from New York City and New Jersey.

After a two-hour meeting with city faith leaders on Wednesday, Mayor Bill de Blasio said the police’s mission was to “protect and respect,” and that he hopes to enlist faith leaders to serve as conduits between their congregations and the police.

The event is being put on by Rev. Al Sharpton and his organization, National Action Network, and will focus on calling for federal intervention in the death of Eric Garner, who died in police custody on Staten Island a month ago. Members of Eric Garner’s family will be there, as well as faith leaders, the NAACP, and the health care and teachers’ unions. Other groups will include Faith in New York and Communities United for Police Reform.

Other support will come from New York City Council member Jumaane Williams, who was a central figure in defeating the NYPD’s use of stop-and-frisk, and City Council Speaker Melissa Mark Viverito. De Blasio will not attend, and Public Advocate Letitia James will be out of town, according to a spokesperson.

Both the mayor and Police Commissioner William Bratton said earlier this week that they are not concerned about violence or disorder erupting at the event march. In fact, Bratton said he expects the march to be “self-policing.”

Although Sharpton had previously been critical of the NYPD in the wake of Garner’s death, he has softened his tone leading up to the Staten Island event. He even thanked Bratton for being involved in the discussion after the meeting with clergy on Wednesday.

Though the rally, which begins at 11 a.m. on Aug. 23, is not directly connected to recent unrest between police and citizens in Ferguson, Missouri, it is anticipated to play heavily into it. New York City has seen multiple protests of its own over violence and arrests of protesters and journalists in Ferguson, which were sparked by the shooting death of Michael Brown, an unarmed African American man.

Sharpton has been shuttling back and forth between Ferguson and New York and will deliver the eulogy at Brown’s funeral on Monday.

On Thursday, Sharpton and Garner’s family met with Loretta Lynch, the U.S. Attorney for the Eastern District of New York. Garner’s family has been appealing for a federal intervention in the investigation of Garner’s case. Sharpton said afterward that no solid decision had been made by Lynch, and their meeting was part of an ongoing discussion on the issue. He said that ultimately, he wants everyone involved in Garner’s death, including the Emergency Medical Technicians (EMT), to be investigated.

Sharpton also reiterated the intended peaceful nature of Saturday’s event, and argued that those predicting problems were simply trying to make trouble.

“There’s just some people who want to stoke things,” he said outside of a federal Brooklyn courthouse with Garner’s widow, Esaw Garner, next to him. “They really don’t want us to protest there.”

A number of smaller protests have been held on Staten Island since Garner’s death, which Sharpton said will only continue.

“Five weeks later, the outrage has not subsided,” said Sharpton, and added that they are “not in any way trying to endanger people.”

However, Sharpton did admit that he has no idea what level of police presence will be at the march and rally, and said that neither he nor his staff were included in plans for public security. Despite that, he reiterated repeatedly that march organizers will support police in keeping the peace on Saturday.

“We’re not anti-police—we support police,” he said. “If people get violent, the biggest problem they would have is us.”