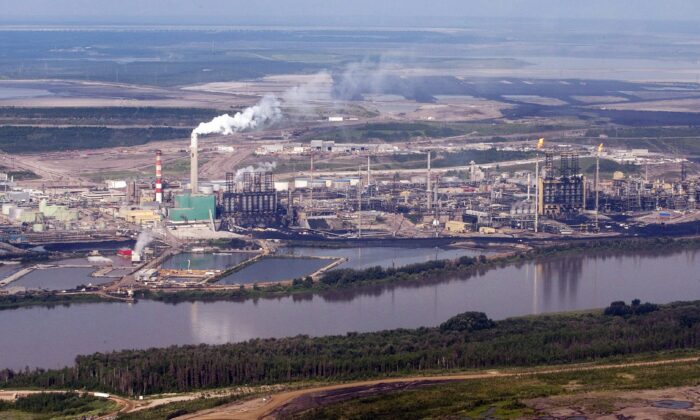 Aerial view of the Suncor mine facility along the Athabasca River near Fort McMurray, Alberta, in a file photo. (The Canadian Press/Jeff McIntosh)
Canada

The Alberta government’s “war room,“ a.k.a the Canadian Energy Centre, has faced a number of battles and made some stumbles in its first 10 weeks of existence, garnering negative publicity and leading opponents to call for its closure, while supporters want it to weather the storm and serve its purpose.

The opposition New Democrats say the initiative is a waste of money, with NDP energy critic Irfan Sabir calling it “a costly, ridiculous failure.”

But Michael Binnion, president and CEO of Questerre Energy and a supporter of the war room, says the negative media coverage of the CEC doesn’t come as a surprise.

“I’m not surprised to see the MSM [mainstream media] criticisms since one of the reasons we need the CEC to inform the public is [due to] the failure of the MSM to give balanced reporting on both the benefits and impacts of our energy choices,” he says.

The centre was founded by the United Conservative Party (UCP) government to promote fossil fuels and pipelines and refute what it says are false claims about the industry.

In the early days of the centre’s operation, its logo was scrapped due to claims of plagiarism, but a new logo brought similar accusations. CEO Tom Olsen mistakenly said in a TV interview that the centre’s purpose was “disproving true facts.” Then the Canadian Association of Journalists called on CEC staff to stop calling themselves reporters after one interview subject complained he felt “misled.”

Another incident resulted in the centre issuing an apology for its response to a New York Times piece on divestment from the oilsands. The centre had tweeted that the Times had a “particular beef with Alberta” and “aren’t the most dependable source.” It also said the outlet’s “track record is very dodgy” and had been “called out for anti-Semitism countless times.”

Olsen later apologized and the tweets were deleted.

Editorials and op-eds in a number of publications, including Maclean’s and The Globe and Mail, have criticized the centre for its gaffes.

Jacqueline Biollo, a principal at Aurora Strategy Group, a government and public relations firm, says the CEC represents “a failed attempt to create a PR machine that is pro-oil.”

“The war room needs to shut down, or at the very least it needs to retreat and take a tactical pause,” Biollo says.

One conservative insider, who wished to remain anonymous, said the war room could benefit from a new CEO. Veteran conservative Alan Hallman, a former campaign manager for Premier Jason Kenney, disagrees but believes the centre’s leadership must include more people with private sector experience in oil and gas.

“We all make mistakes, and the important thing about it is that they learn from these mistakes. They will have to feel their way through this,” says Hallman. “But this is something that is more than vital for the independence of the Canadian economy and politics [against foreign influence].”

Binnion says he suspects that the majority of Albertans who voted for the UCP want to keep the centre.

“The resource belongs to Albertans and there is a fiduciary obligation by the government to inform and conserve value for Albertans,” he says.

He adds that judging the CEC’s performance after just a few months isn’t a fair assessment and that more time is needed to see the effectiveness of the campaign.

The Canadian Association of Petroleum Producers (CAPP) thinks the centre should be kept.

“As the owners of the resource, it is important and makes sense for the Government of Alberta to defend and dispel any myths about our resources,” says CAPP vice president of communications Stacey Hatcher.

“There is a lot of misinformation being shared about Canada’s oil and natural gas industry, which has been negatively impacting our country’s reputation and global competitiveness as well as the livelihoods of hard-working Canadians.”