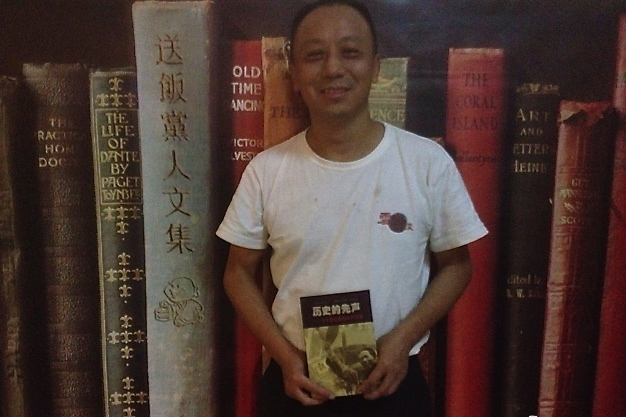 A photo of Xiao Shu, 51, dated May 13, 2013, holding up a book titled "History's Herald" at a Chinese event. Xiao, a prominent veteran journalist, was detained on Friday after he called for the release of a fellow human rights activist, Xu Zhiyong, jailed on July 16. (Sina Weibo)
China

Calling for Release of Friend, Chinese Veteran Journalist Jailed Too

After calling for the release of human rights activist Xu Zhiyong, a prominent veteran journalist was detained himself by Beijing authorities on Friday.

Xiao Shu, 51, was arrested on “suspicion of gathering people to disrupt public order.” He disappeared after he met with security officers in the afternoon. His last reported contact was with Wang Gongquan, a friend and venture capitalist, who received a WeChat instant message from Xiao saying that officials were abducting Xiao out of Beijing.

Xiao was one of the supporters for the New Citizens Movement founded by Xu and others which demands a democratic China that respects the rights of its citizens.

Xiao Shu is a penname for Chen Min who has criticized the regime in articles and columns for mainland media, including China’s Southern Weekly newspaper and the Yanhuang Chunqiu magazine. He was also one of the journalists and academics that began the July 23 open letter calling for Xu’s release, who was jailed on July 16, that garnered over 400 signatures.

China’s human rights situation has deteriorated recently, according to a U.S. official, Uzra Zeya, who pointed to “attempts to control and silence activists by targeting family members and associates of the activists.” Zeya referred to officials’ harassment of blind activist’s Chen Guangcheng’s family and the 11 year jail term of Nobel Peace laureate Liu Xiaobo’s brother.