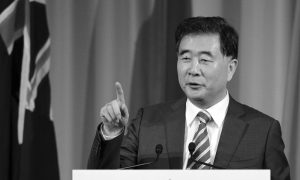 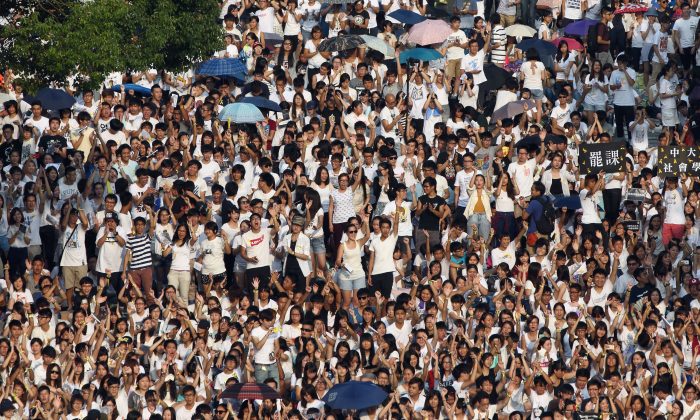 Around 13,000 students from 25 universities and colleges rallied in Hong Kong on Sept. 22. The event began a week-long boycott of classes in protest of Beijing's control over the selection of candidates for the chief executive. (Pan Zaishu/Epoch Times)
China

Calling for Democracy, Over 10,000 Students Boycott Classes in Hong Kong

Thousands of students from 25 universities and colleges in Hong Kong embarked upon a week-long boycott of classes on Monday, protesting against recent decisions by Chinese authorities to control and restrict the process of electing Hong Kong’s chief executive.

Students wearing white shirts and yellow ribbons that represent universal suffrage packed into the Chinese University of Hong Kong for speeches marking the beginning of the action. The number of participants reached over 13,000 by 4:30 p.m., organizers said.

The rally began at 2 p.m. with speeches by student and teacher representatives, lectures about protecting human rights and student movements in history, and a screening of the documentary “Civil Disobedience,” by Taiwanese director Chen Yu-Ching in the evening.

The outrage of students followed a political meeting in Beijing on Aug. 31, when the National People’s Congress, Chinese rubber-stamp legislature, concluded that a committee of 1,200 elite figures, whose composition is heavily influenced by Beijing, will vet the candidates to be elected to the position of Hong Kong’s chief executive in 2017.

Beijing calls the process universal suffrage, because it will be the first election for the top post that every Hong Kong permanent resident can participate in. But the fact that Chinese authorities control the selection of candidates turns the whole enterprise into a farce, opponents say.

“No one has the right to put an end to the future of our whole generation except ourselves. Disobedience is the hope for Hong Kong people to take our future back,” said the student declaration, read out at the rally by Alex Chow, chairman of the Hong Kong Federation of Students.

“This is a turning point that the Chinese Communist Party government has to respond to, because so many Hong Kong people believe that the CCP’s method of appointing the chief executive is unfair,” he continued.

The Hong Kong Federation of Students also called on the current chief executive, Leung Chun-ying to communicate with the students on Tuesday, and explain Beijing’s “ridiculous decision” to the Hong Kong people.

Students at middle schools and high schools in Hong Kong wore and handed out yellow ribbons on Monday, showing their support for the student strike, according to Hong Kong media Apple Daily.

A bit of help also came from mainland China. “I support the student strike, the civil disobedience, and Occupy Central in Hong Kong,” Hu Jia, a Beijing-based activist, posted on Twitter. “Hong Kong students are awakened actors, and they are the lucky ones in this era. They also lead the way for Chinese students.”

Canada Hong Kong Link, a civic organization in Toronto, also hosted a gathering to echo and support the Hong Kong’s democracy movement. Hong Kong students at the Queensland University of Technology in Australia distributed yellow ribbons and collected petitions on campus to show their support.

Hong Kong university teachers have also been supportive, with 110 signed up to deliver classes to students on strike in Tamar Park in Hong Kong.

The student strike is a prelude to Occupy Central With Love and Peace, a pro-democracy civic movement that is demanding genuine universal suffrage, anticipated to take place in October. The movement aims to fill Hong Kong’s financial district with protesters as a way of attempting to force Beijing’s hand, or at least make known the city-state’s objections to the new restrictions.

Beijing’s decision on election reform will need to be supported by more than two thirds of Hong Kong’s Legislative Council, requiring the buy-in of many of the pro-democracy politicians, whose support is far from guaranteed. That vote is likely to take place early next year.

With reporting by Ma Yinghui.