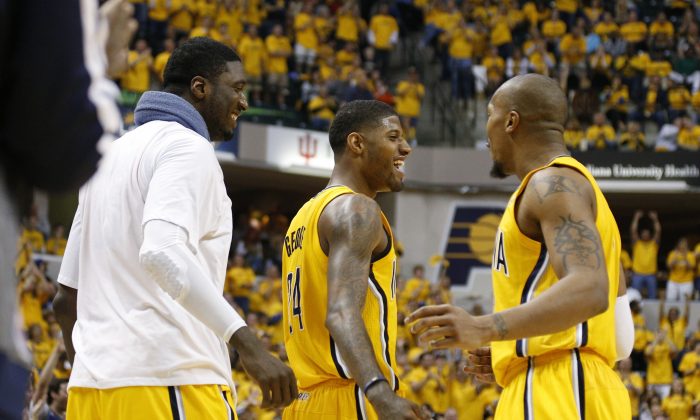 Paul George #24 of the Indiana Pacers celebrates with Roy Hibbert #55 and David West #21 during Game Seven of the Eastern Conference Quarterfinals of the 2014 NBA Playoffs against the Atlanta Hawks on May 3, 2014 at Bankers Life Fieldhouse in Indianapolis, Indiana. The Pacers won 92-80. (Joe Robbins/Getty Images)
Sports

Callie Rivers, the purported girlfriend of Indiana Pacers star Paul George, congratulated her father Doc Rivers after his Clippers beat the Warriors in the opening round of the NBA playoffs.

Rivers posted a photo on Instagram of her arm around Rivers after the game, saying “You deserve it, prod. we ain’t done tho.”

Rivers is allegedly going out with George, considered by many to be the star of the Pacers team. The Pacers also made it into the second round of the playoffs.

George has been in the news recently for other reasons as well.

Before going out with Rivers, George reportedly had a relationship with a woman from Miami named Daniela.

They ended the relationship after summer 2013 but later that year Daniela told George that she was pregnant and that she believed he was the father. She recently had birth to a daughter.

George didn’t deny the relationship but told TMZ in a statement earlier this year: “If and when there is legal confirmation that I am the father, I will fully embrace my responsibilities. This is a personal matter that is still being sorted out, so I hope you can respect my privacy. “