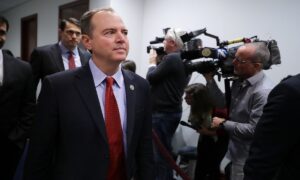 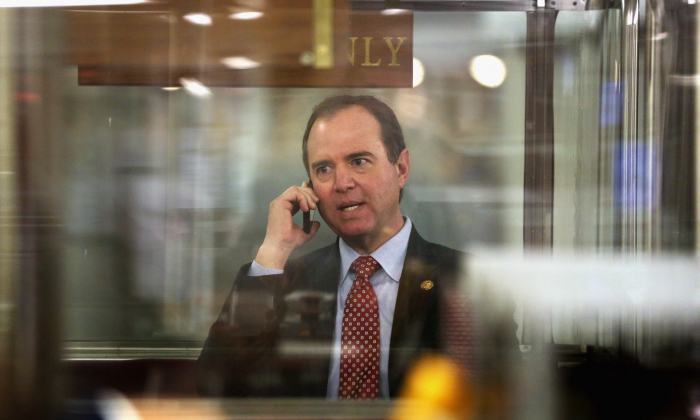 A phone call featuring Rep. Adam Schiff (D-Calif.) saying he’d accept dirt on President Donald Trump was highlighted by a Republican representative over the weekend during the ongoing war over Trump’s possible impeachment.

Schiff, chairman of the House Intelligence Committee—who repeatedly promised Trump colluded with Russia but failed to provide evidence of those claims—is one of the main faces of the impeachment inquiry into Trump’s phone call with Ukrainian President Volodymyr Zelensky.

Schiff, who says Trump should be impeached, came under fire for fabricating part of the phone call transcript while appearing to read from it during a committee hearing last week. Trump has called on him to resign and accused him of treason.

Schiff was reached out by two Russians two years ago, who posed as Andriy Parubiy, the former speaker of Ukraine’s parliament, saying they had damaging information about Trump.

During the call, Schiff tells the men that he would accept dirt on Trump.

“So, you have recordings of both [Russian journalist Ksenia] Sobchak and [Russian model and singer Olga] Buzova where they’re discussing the compromising material on Mr. Trump?” Schiff asked the callers.

“Well obviously, we would welcome a chance to get copies of those recordings,” Schiff said.

The Russians were two radio hosts, Vladimir Kuznetzov and Alexey Stolyarov, who were prank calling Schiff. They claimed to have explicit pictures of Trump and that Parubiy could provide audio of Sobchak and Buzova talking about the pictures.

They also claimed that Michael Flynn, Trump’s onetime national security advisor, met with a different Russian to try to figure out how to stop the alleged photos from being released to the public.

“I would just caution that our Russian friends may be listening to the conversation, so I wouldn’t share anything over the phone that you don’t want them to hear,” Schiff warned at the start of the call.

“All righty. Good, this is very helpful. I appreciate it,” Schiff said later. “We will try to work with the FBI to figure out, along with your staff, how we can obtain copies.”

.@RepAdamSchiff is a hypocrite. pic.twitter.com/LFbGFBUG6r

A clip from the conversation was published by Rep. Matt Gaetz (R-Fla.) on Sept. 29.

Schiff has never responded directly to questions about him agreeing to take dirt during the phone call but his campaign later claimed that he knew before the call started that it was “probably bogus.”

“Before agreeing to take the call, and immediately following it, the committee informed appropriate law-enforcement and security personnel of the conversation, and of our belief that it was probably bogus,” a spokesman told the Atlantic.