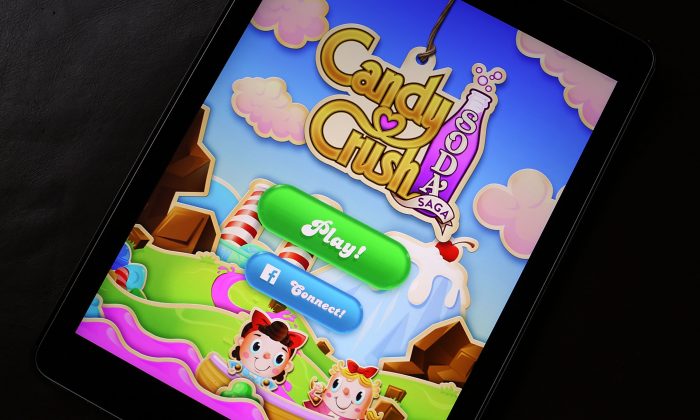 A Candy Crush game is seen on an iPad in Miami, Fla., on Nov. 3, 2015. It was announced today that game maker Activision Blizzard has paid $5.9 billion to purchase King, the parent company of games like Candy Crush Saga and Bubble Witch Saga. (Joe Raedle/Getty Images)
Business & Economy

‘Call of Duty’ Creators Buy ‘Candy Crush’ Maker for $5.9B

A look at game mergers
By The Associated Press

NEW YORK—The company behind the hugely successful “Call of Duty” video games is launching an all-out attack on the mobile gaming market by shelling out $5.9 billion for the maker of “Candy Crush Saga.”

Activision Blizzard’s purchase of King Digital Entertainment will help it keep pace as video gaming continues to move away from TV-connected consoles to smartphones and tablets.

And it’s bound to add new players to Activision’s ranks, such as women, who haven’t been especially interested in the company’s violent games up to now.

But the move comes at a hefty price, especially for a company that has seen its sales and profit drop in recent years.

And while “Candy Crush” is notoriously addictive, it has waned in popularity for some time, and it’s unclear when or if King Digital’s next hit mobile game will come.

“This gives them access to the mobile market at a time when the console market has had a tremendous year,” Lord said, “but we’re not sure where it’s going to go.”

And it’s not just console games that are moving over to mobile devices; mobile games are being played on consoles, too. It’s about being able to reach players wherever they may be, Lord said.

The takeover will create one of the world’s biggest entertainment networks, with a combined total of more than a half-billion monthly active users in 196 countries, by Activision’s count.

Activision said it sees tremendous potential in the mobile gaming market, predicting it will generate more than $36 billion in revenue by the end of 2015 and grow more than 50 percent by 2019.

But while people might not mind spending $60 for the latest “Call of Duty” game, many balk at the idea of handing over a few dollars on a game for their smartphone, making it tough to make money off such products.

Most people play “Candy Crush” for free. The company makes money by charging them for more lives or other extras that allow them to play more often.

“It’s always harder to monetize on mobile, but on the same token you have many more people in mobile,” Lord said. He said that if only a small fraction of the millions of people playing a hit game pay for extras, it can be a windfall for the game’s owner.

Hits can be few and far between. None of King’s other games have been able to replicate the success of “Candy Crush.” King’s adjusted profit fell 18 percent to $155 million in the second quarter.

“We expect a heavy dose of skepticism from investors, especially given the large deal size,” the analysts said in a research note.

Activision’s fortunes tend to hinge on its latest “Call of Duty” game. Launched in 2003, the violent, first-person shooter games generated $11 billion in sales through the end of the 2014 fiscal year. Activision also makes the “World of Warcraft” and “Skylanders” games.

While those kinds of games don’t traditionally appeal to women, Activision CEO Robert Kotick told CNBC on Tuesday that about 60 percent of King’s audience is female.

“Attracting women to gaming is a really important part of our strategy,” he said.

While Activision stock has tripled over the past three years, its profit has fallen from $1.15 billion in fiscal 2012 to $835 million in 2014. King’s stock hasn’t made much headway since the company went public in March 2014.

Activision, based in Santa Monica, California, will pay $18 in cash for each King share, 20 percent over its Friday closing price.

The boards of both companies have approved the deal, but King shareholders must still vote on it, and regulators in Ireland, where King is based, must also sign off.

ACTIVISION BLIZZARD AND KING: The publisher of the successful “Call of Duty,” ”Skylanders” and “Guitar Hero” series will be adding another popular—but not growing—franchise to its arsenal: “Candy Crush.” Activision Blizzard’s $5.9 billion purchase of mobile game maker King Entertainment would sweeten the publisher’s push into mobile gaming in recent years, following the release of “Call of Duty” and “Skylanders” editions for portable devices.

MICROSOFT AND MOJANG: The maker of Windows operating systems and Xbox game consoles constructed the $2.5 billion purchase of “Minecraft” developer Mojang in 2014. Microsoft quickly begun incorporating the brick-building game series into its new products with the release of a Windows 10 edition of “Minecraft,” as well as demonstrating an augmented reality rendition for use with its prototype HoloLens headset at industry trade events this year.

FACEBOOK AND OCCULUS: The social media behemoth acquired the virtual reality startup in 2014 for $2 billion. Oculus has drummed up unbridled interest from game and filmmakers since unleashing its new take on VR technology in 2012. However, the pairing of Facebook and Oculus hasn’t yielded many real-world results. Oculus isn’t planning to release a consumer edition of its immersive Rift headset and Touch controllers until early 2016.

AMAZON AND TWITCH: Despite a reported acquisition attempt by Google, online retail giant Amazon successfully captured video game streaming service Twitch for $970 million in 2014. In the year since Amazon bought Twitch, Google competitively launched a dedicated rendition of YouTube for gamers, while Twitch hosted its first fan convention. The company currently boasts that more than 100 million viewers a month are watching content on the platform.

ELECTRONIC ARTS AND POPCAP: Four years before Activision seeded plans to obtain King Entertainment, rival Electronic Arts made its largest purchase yet with the acquisition of mobile game publisher PopCap Games for $750 million in 2011. The creator of such beloved series as “Plants vs. Zombies,” ”Bejeweled” and “Peggle” has since released console versions of its games. The latest edition, “Plants vs. Zombies: Garden Warfare 2,” is set to sprout in spring 2016.