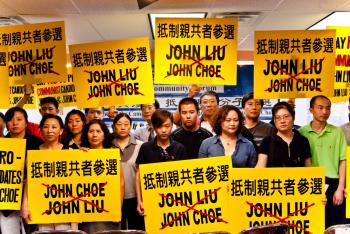 Representatives from the Chinese and Korean community call for boycott of NYC Comptroller candidate John Liu's campaign. (The Epoch Times)
US

QUEENS, New York—Representatives from the Chinese and Korean community condemned Council Member and city comptroller candidate John Liu, on Tuesday, calling on the Asian community to boycott his campaign.

At a forum held at the Chinese Democracy Party office in Flushing, Queens, Asian community leaders from several organizations reviewed Liu’s history as a council member. Among the points of concern were his keeping silent following the terrorist attacks on 9-11, his lack of support for constituents attacked in his district, and for the support he has shown for the Chinese Communist Party (CCP).

“The reason we all came to this country is that we think it’s more free and prosperous,” said Victor Chen, president of The Chinese Military Academy Alumni Association in USA, a Taiwanese organization.

Chen added that anyone who has been “taken in by the communist’s interest is only interested working for their own interests.”

The overlying theme of the forum was that Liu is a supporter of the Chinese communist regime. Liu Guohua, vice president of the Coalition of Guards for American Values, gave more background to this claim.

Rather than condemn the attacks or show support for the Falun Gong practitioners, Liu instead welcomed the attackers into his office for a personal meeting. Not long after, they were able to establish a booth along Main Street in Flushing, where they distribute hateful materials against Falun Gong that echoes the propaganda spread by the CCP.

At least 12 people were arrested for attacking Falun Gong practitioners—a meditation group currently being persecuted by the Chinese Communist Party.

Falun Gong is a spiritual discipline based on truthfulness, compassion, forbearance, including five exercises. People who practice it have been persecuted by the Chinese Communist Party (CCP) since July 1999. Before then it had attracted between 70-100 million practitioners since its introduction to the public in 1992.

One of the victims of the attacks, Judy Chen, went to Liu’s office on June 30 2008 to ask for help. Guohua referenced that rather than help her, Liu expelled her from his office, saying “bye, bye, bye!”

Guohua added that in addition to expelling Chen—a mother of two U.S. Marines—after searching through records of Liu’s political career, it was found that Liu has never issued a proclamation in support of U.S. troops.

Conversely, Liu has supported the Chinese military. Guohua added that when the CCP launched two of its military satellites, Liu personally gave proclamations to the Chinese Consulate in support.

After searching through records of Liu’s eight years in office, it was also found that “not once did he condemn the attacks of the terrorists [on 9-11,]” said Guohua.

“Even though he is Chinese,” said Guohua to the room full of Chinese residents, “we need to be very clear he is working with the Chinese communist government, which is why we left mainland China.”

Choe—who Liu is a prime supporter of—gave a speech in 2006 at the Preparing for the Rebirth of the Global Struggle for Socialism conference where he said “Korea is at the front line of the liberation struggles against imperialism,” according to the New York Post.

Choe also helped found Nodutdol (Korean for “stepping stone”), an organization which leads trips to North Korea and which is shrouded in heavy controversy in the Korean community.

President of the Pan Asian American Freedom Protection organization, Thomas Choi, recalled his memories of when North Korea attacked South Korea in 1950. “I was a little kid at the time,” said Choi. “They tortured people. You can’t even think about how bad [the communists] are.”

“Now the communists follow us to the United States of America,” said Choi.