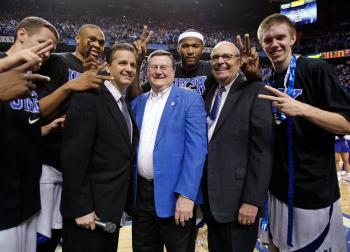 Before the season began, Kentucky stood at 1,988 wins while North Carolina stood at 1,984 wins. Kentucky coach John Calipari said, “Believe me, the day after I took the job, I started thinking how are we going to get to 12 before they get to 16.” Calipari is in his first year at the helm of college basketball’s winningest program.

The path to 2,000 wins has hit some obstacles in recent years. In 2007, Orlando “Tubby” Smith succumbed to the enormous pressure to maintain a high level of success at Kentucky and resigned to accept the head coaching position at the University of Minnesota. As the search for Kentucky’s next head coach ensued, Calipari’s name barely registered in the rumors.

First, Florida’s Billy Donovan publicly turned down the job. After that, Texas’s Rick Barnes shot down speculation that he would leave Texas for Kentucky. Then, Villanova’s Jay Wright reportedly said no to the offer.

As the rejections piled up, Kentucky became desperate and asked a coach who they knew would say yes—Texas A&M’s Billy Gillispie.

Gillispie had just coached Texas A&M to a Sweet Sixteen appearance as a No. 3 seed with star point guard Acie Law, who would end up being the No. 11 pick in the 2007 NBA Draft.

Gillispie had one stellar season at a school known more for its football than basketball. He was unproven and not a marquee name yet he was offered the head basketball coaching position at Kentucky.

Gillispie’s two years at Kentucky were tumultuous and ultimately unsuccessful. In March, Kentucky failed to make the NCAA Tournament for the first time in 18 years. Not since the program was hit with a two-year postseason ban for major NCAA violations in 1989 had they sunk so low.

Kentucky subsequently fired Gillispie and started a search for its third coach in four years. This time, Calipari’s name was second on the list after Donovan once again turned down the job.

Calipari wanted his “dream job” in 2007 after leading Memphis to 33 wins and said, “I called my wife every day for six days. Did they call? Did they call? Then I kind of figured out they’re not calling.”

Possible reasons for why Kentucky did not go knocking on Calipari’s door may have centered on the fact that Calipari is the only coach to have Final Four appearances erased from the record books at two different schools, Massachusetts in 1996 and Memphis in 2008.

In 1996, star center Marcus Camby accepted money from a sports agent while still in college. In 2008, current NBA Rookie of the Year Derrick Rose was found to have falsified his high school SAT scores by having someone else take the test for him. In addition, Rose’s brother, Reggie, had been allowed to travel with the team for free, further violating NCAA regulations.

Calipari had no knowledge of either situation and was cleared of any wrongdoing in both instances.