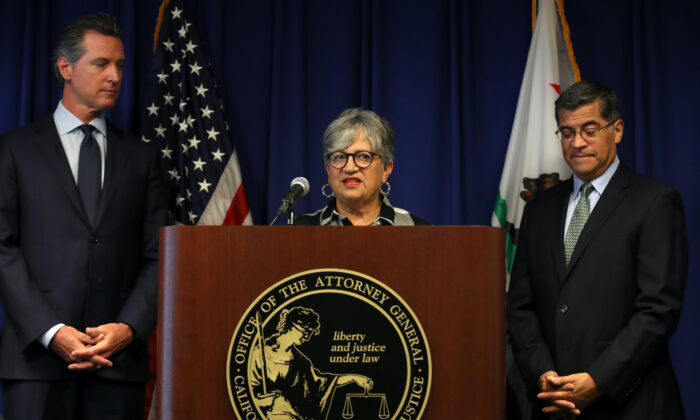 Zeroing in on “unelected tyrants” in a state as dysfunctional and regressive as California is not easy. There are too many targets. Even California’s elected state legislators, as they cook up and pass countless tyrannical intrusions into our lives and livelihoods, are themselves “elected” only so long as they pledge obeisance to a powerful coalition of special interests that have turned California into a one-party state.

But once the state Legislature has done what it’s been told, whatever glimmer of transparency that still attends to politics in the Capitol Dome is extinguished. Left to implement legislative edicts are unelected bureaucrats, themselves operating under the direction of appointed commissioners. These commissions wield immense power to affect the daily lives of Californians.

One recent example of this would be the 11-0 vote in May of this year by the California Coastal Commission to deny approval for a new desalination plant in Huntington Beach. Capable of producing 55,000 acre feet of fresh water per year and impervious to droughts, this badly needed plant would have been a twin to the successful desalination plant further south in Carlsbad, just north of San Diego. But despite spending over $100 million and over 20 years submitting permit applications, defending against litigation, investing in engineering plans, and continuously resubmitting to conform with endlessly mutating regulations, the applicant was stopped. Cold.

“Staff experts” at the Coastal Commission claimed this desalination plant would “devastate” marine life and produce “expensive water too costly for low-income consumers.” These are patently false assertions, but because “devastate” and “expensive” are relative terms, these biased in-house experts can get away with saying them. There are desalination plants operating all over the planet, and the proposed plant in Huntington Beach would have incorporated all the latest mitigation technologies.

As for the cost, the desalinated water would have been purchased by water agencies that would have blended its costs with what they pay their other water suppliers. Consumers would not have been harmed. In fact, having this guaranteed supply of water would have even occasionally helped municipal water agencies in their negotiations with other suppliers, lowering costs. This plant was denied its permit because the California Coastal Commission is dominated by environmentalist zealots who do not care about the welfare of ordinary people. Thanks to their irresponsible ruling, it is unlikely an applicant will ever attempt to build a major desalination plant in California.

For the entire 840 miles of California coast, the California Coastal Commission can prohibit any development within 1,000 yards of the high tide marker. In areas designated “significant coastal estuarine, habitat, and recreational areas,” this power can extend much further, up to five miles inland. The Coastal Commission has made it impossible for all but the most powerful corporations and wealthiest individuals to build anything near the ocean, and it frequently harasses small property owners. If the Coastal Commission had been established a century earlier, every single one of the charming towns and neighborhoods lining California’s coast would not exist.

So who runs the Coastal Commission? Who are the individuals who have the power to deny fresh water to a water parched state? The governing board of the Coastal Commission has 12 members. Four are appointed by the governor, four by the State Senate Rules Committee, and four by the Speaker of the State Assembly. No qualifications whatsoever are required. Many appointees are socialites, donors, activists, or all three.

That would perfectly describe one of these board directors, appointed in 2011. She is a major donor to Democratic politicians, and fiercely committed to “protect the coast.” Her late husband, with whom she presumably lived, had a mansion in Pacific Palisades that recently listed for $35 million. Situated on 1.39 acres, a quick zoom in using Google Maps (satellite view and street view) will confirm the presence of expansive lawns and lush hedges. One may only imagine the monthly water consumption on this property.

Exposing this lifestyle is not to criticize it. People who earn a lot of money should be able to buy nice things, live in big homes on big lots, and use as much water as they can pay for. That’s what anyone would believe if they were committed to a rational free-market economy and believed in practical public/private investment in infrastructure to facilitate, at every level, more availability of these amenities for everyone.

But how on earth can someone who has ever lived on a water-guzzling palatial estate in Pacific Palisades be so grotesquely elitist and hypocritical as to deny abundant water to the masses of humans who don’t live in $35 million mansions, but just want to water a patch of lawn so their children have a soft, cool, safe space in their small yards to play?

What’s happening at the California Water Commission is happening elsewhere. The California Air Resources Board (CARB), with a governing board consisting of 14 unelected political appointees, is outlawing gas-powered tools, off-road engines, gasoline-powered cars, and even diesel-powered trucks. This barely scratches the surface of how CARB edicts and enforcement actions are harming the prosperity and freedoms of normal Californians.

At every layer of California’s governments, state, regional, and local, commissions run by unelected appointees are using their power to reduce the standard of living and increase the cost of living. In the case of desalination plants, which Californians desperately need along with more reservoirs, aqueduct repairs, and wastewater recycling, the Coastal Commission gave cover to Governor Newsom, and to Assembly Speaker Anthony Rendon, when they voted unanimously to deny the Huntington Beach desalination plant permit. Both these politicians have vocally supported desalination projects, including the big one proposed for Huntington Beach. But if they were serious, each of them could fire four commission board members, and install new directors who would show genuine concern for working families in California.

The solution is to elect politicians with the courage and vision to fire all these commission appointees, everywhere, if they cannot recognize that the environmentalist movement is out of control. They can be replaced with new directors who are willing to restore a humanitarian balance between the interests of people and the stewardship of nature.