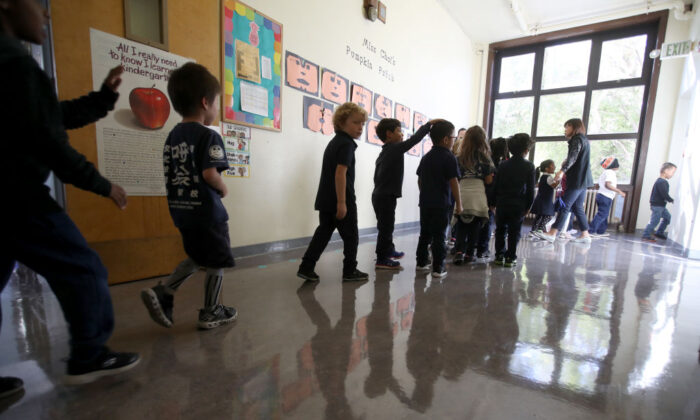 In California, various stakeholders have been vying to decide what exactly “age appropriate” means in the state’s guidelines for sex education. Currently, local school districts interpret what is suitable for a given age group.

“I am the expert on my kids,” said Denise Pursche of Clayton City, California, who believes parents should decide what is age appropriate.

She has fought for legislation that would give parents easier access to sex education curricula and mandate that parents opt in for their children to be taught that curriculum.

That legislation, SB 673, introduced by Republican state Sen. Mike Morrell, failed on Jan. 15. But, Pursche said, “I’m not done. It’s not over, and I am not finished.”

Trying to Get Information as a Parent

It started in 2017, when Pursche spent several weeks emailing back and forth with her children’s school trying to obtain information about their new sex ed curriculum.

It was a difficult process, and she said it should be easier for parents, especially given the controversies that have abounded in California since the 2016 sex ed changes.

That’s when AB 329 went into effect. It’s described as a “comprehensive sexual health education and HIV prevention education” plan, and it has changed the suggested materials and approaches.

Summer Reeves, a spokesperson for the Santa Clara County Office of Education, told The Epoch Times that the office decides what is “age appropriate” with the help of a comprehensive sexual educator network.

One of the partners in that network is the organization Planned Parenthood, which has created some of California’s most controversial sex ed curricula.

Pursche gave an example of material she and her husband considered to be age inappropriate for their 10-year-old twins in 2017.

Doctors, psychologists, and educators have vetted the age-appropriateness and accuracy of this controversial yet popular book, according to its authors.

But Pursche didn’t feel it was age appropriate. She has a master’s degree in psychology and is a mother of three children—her twins are now 12 and her eldest daughter is 17.

Even though the book itself wasn’t presented to the children, Pursche felt that giving children the title of the book would pique their curiosity and encourage them to look it up.

On the California Department of Education (CDE) website, a book titled “Sex, Puberty, and All That Stuff” is listed as one of the reference books for fourth through sixth grades. CDE’s Health Education Frame Work suggests that “teachers can start by reading to students carefully selected excerpts from” this book.

“If I were a sexually perverted person, and distributed images like the ones in this book to children on a playground, I would appropriately be arrested,” said Tim Thompson, a pastor in Murrieta, California. He is also the founder of Our Watch, an organization that promotes parental rights.

“Teaching about sexuality is not the job of the public school system,” Thompson said via email. “It is a responsibility that lies solely upon the parent or legal guardian of the child.”

In May 2019, the CDE removed several controversial books from its recommendations, but this one remains.

The Epoch Times visited several elementary schools in northern California and found they were teaching basic reproductive anatomy, and the sexual education below seventh grade wasn’t graphic or detailed. However, the schools reported they will be revising their curriculum this year.

Currently, parents can opt their children out of sex education for all grades. However, the CDE states that “the opt-out provision … does not apply to instruction or materials outside the context of comprehensive sexual health education, including those that may reference gender, gender identity, sexual orientation.”

The department states that school districts must notify parents 14 days before sex education classes to give them time to opt out.

After many months of advocating for sex-education restrictions in her local school district, Pursche decided to become a citizen legislator and draft a bill to give parents more power. That bill became SB 673 and Sen. Morrell agreed to introduce it.

At a rally in March 2019 at the California Capitol, Morrell commented on the influence California’s sex ed rules could have across the nation. “It is said, as California goes, so goes the nation,” Morrell said.

“Ladies and gentlemen, California is the battleground for the soul of the United States of America.”

On Jan. 15, SB 673 was voted down 5–2 along party lines by the Senate Education Committee, which has five Democratic senators and two Republicans.

Tami Martin, a legislative manager from the nonprofit Equality California, said at the hearing that the opt-in standard of SB 673 would “deny many students including those low income, homeless, or foster care [children] the public education that they deserve.”

The idea is that the parents or guardians of these children would be less likely to respond to an opt-in request from schools.

Language barriers have also been an issue in the discussions around both opt-out and opt-in issues.

The CDE denied her request, she said. The department didn’t reply to The Epoch Times on the matter.

Lebsack said there were no versions available in Korean, Chinese, or Vietnamese either.

“California has a very large immigrant minority population, and these parents care about their children’s education just as much as English-speaking parents,” Lebsack said. “Their voices should not be muted, especially when teaching children about unprecedented subjects that have never been in public classrooms concerning gender and sexuality.”

Pursche’s twins are in seventh grade now. The school’s seventh-grade curriculum includes a demonstration of putting on condoms. Pursche asked her husband if he thought that was age appropriate and he said: “No. They are not even thinking of sex yet.”

About 4 percent of children under the age of 13 are sexually active, according to the 2016 report on Youth Risk Behavior Surveillance published by the Centers for Disease Control. Pursche said, “It is completely ridiculous to use the idea that some [small percentage] of children are having sex, then we have to tell every child everything.”

Pursche continues to opt her children out of sex education. Though SB 673 failed, she hopes her continued efforts will alert other parents and make it easier for busy parents to understand the sex education their children are receiving and decide whether to consent to it.