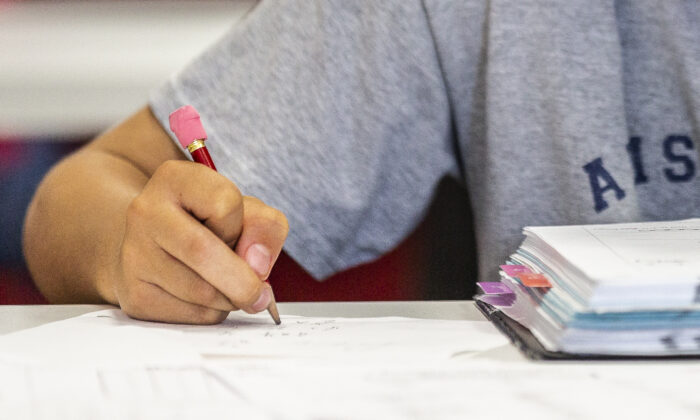 A revised version of California’s proposed new mathematics framework omits some controversial parts from the first draft, but still pushes for equity in math, critics say, which includes teaching political activism to children.

Michael Malione, a private math tutor and former teacher, founded the grassroots group SaveMath.Net in 2021 after the 11-member State Board of Education released the first draft of the proposed Mathematics Framework for public comment.

Malione told The Epoch Times that “most of the sentiment” that was controversial in the first draft remains in the second draft.

“It injects politics into the math. It was designed with a particular political purpose in mind, and that hasn’t changed,” he said.

In a statement emailed to The Epoch Times, Malione said the second draft uses the words “equity” and “equitable,” but never specifically defines what equity means, other than a reference to the second chapter of a position statement of the National Council of Teachers of Mathematics.

“Addressing equity and access includes both ensuring that all students attain mathematics proficiency and increasing the numbers of students from racial, ethnic, linguistic, gender, and socioeconomic groups who attain the highest levels of mathematics achievement,” the statement reads.

A sample lesson in the second draft uses fictitious examples of a struggling two-mom black family, a single white female, and Filipino and “LatinX” families all earning low wages. The lesson asks students to determine if the pay is fair based on housing costs in different cities. If students determine the wages are unfair, teachers are urged to invite community stakeholders, such as labor unions, to speak at their schools. Teachers are then asked to encourage their students to take a social justice activist stance and write letters to elected government officials demanding higher wages.

However, the lesson doesn’t cover any political counterarguments, such as the argument that minimum wage hikes can lead to layoffs when business owners and corporate executives cut staff to cover increased labor costs.

“Throughout many of the examples given in the framework, and by virtue of the way it’s structured, there appears to be more emphasis on consciousness-raising than there is on teaching the subject content of mathematics,” Malione wrote.

The second draft, like the original, “calls for math lessons that rely much more extensively on mathematically unnecessary and wordy language … while claiming they have the interests of English Language Learner students at heart.”

The proposed framework also discourages intervention and early remediation for students who need help and puts student engagement way ahead of mathematical content, he said.

Students in school districts who don’t follow the new framework would be at an advantage over those who do because they would have the opportunity to learn standards-based math content rather than vaguely defined “big ideas” mentioned in the framework, according to Malione.

Bill Evers, director of the Center on Educational Excellence at the Independent Institute and former research fellow at the Hoover Institution, told The Epoch Times that he agrees that the revised draft of the new math framework remains “highly politicized.”

“They left in the political stuff,” he said. “They watered it down a little bit, but it’s still quite political.

Evers said the new draft is “notably improved,” but that the math curriculum focuses too much on “dogma about politics and dogma about how to teach math,” and that many of the math problems are still framed in the context of social and environmental issues.

In chapter two of the framework, “Teaching for Equity and Engagement,” a fifth-grade teacher is considered exemplary for promoting “sociopolitical consciousness,” according to Evers.

“Teachers can take a justice-oriented perspective at any grade level, K–12, helping students feel a sense of belonging … and empowering them with tools to address important issues in their lives and communities,” the curriculum reads.

Chapter one of the framework, “Mathematics for All,” encourages teachers to have students do exercises that involve patterns, games, or “real-world contexts,” such as “environmental or social justice.”

Evers, who served as U.S. assistant secretary of education during the George W. Bush administration and was selected as an adviser for the U.S. Department of Education in former President Donald Trump’s transition team in 2016, said the politicization of math will only distract students from excelling in their studies, including ethnic minority students.

The Independent Institute sent an open letter signed by more than 1,200 experts, including professors, business professionals, and venture capitalists to California Gov. Gavin Newsom on July 13, 2021. The letter demanded that the State Board of Education and the Instructional Quality Commission revise the first draft of the proposed math framework.

Evers said on March 15 that the letter appears to have persuaded the state to back off from its original proposal that would have hindered advanced students—including ethnic minorities—from excelling to higher levels of learning in mathematics.

The first draft of the framework would have forbidden separate math groups and forced all students into one large “heterogeneously mixed” group, he said. The second draft would allow some “differentiated grouping,” so a seventh-grade student capable of doing high school math wouldn’t be held back because another student in the same class is working at a third-grade level.

The California Department of Education (CDE) didn’t respond to inquiries about equity in math. However, it states on its website that “equity influences all aspects” of the proposed math framework. It defines “equity” within the context of the mathematics framework as “an aim … to respond to the structural barriers put in the place of mathematics success.”

The CDE states that the “overarching principles that guide work toward equity in mathematics” include the ideas that “all students deserve powerful mathematics; high-level mathematics achievement is not dependent on rare natural gifts, but rather can be cultivated; [and] access to an engaging and humanizing education—a socio-cultural, human endeavor—is a universal right.”

Evers, who holds a doctoral degree in political science, recently co-authored a paper, “’Critical Math’ Doesn’t Add Up: Race Consciousness and Radical Egalitarianism in the Curriculum,” with Ze’ev Wurman, a research fellow at the Independent Institute and a former U.S. Department of Education senior policy adviser.

The paper examines the doctrine of those behind the push for “critical” or “equitable” math—once known as “radical math,” an idea that has been around for decades. Opponents of this kind of “woke math” argue that it promotes forced outcomes of “equity,” rather than embracing the traditional U.S. approach of “equal opportunity.”

In his research, Evers noted that many “critical math” advocates believe that conventional math is inherently political, rife with issues of domination and power, and serves nationalism, xenophobia, militarism, and “racial capitalism.”

Proponents of critical math claim that children can only make sense of mathematics if they do so based on specific examples from their own lives and social interactions and that math is used to advance or block a particular agenda. They argue that math is so inextricably bound up with social conflict, that teachers should encourage students “to challenge the use of math by those who dominate American society,” according to Evers’s research.

Experts say this approach is related to aspects of critical race theory (CRT), which teaches students to view the world through a critical lens based on race and reject systemic racism. It also encourages students to become “anti-racist” social justice activists.

Proponents, including teachers unions, believe that teaching the tenets of CRT will create a better global society based on “diversity, equity and inclusion” (DEI), while opponents believe it pushes neo-Marxist ideology.

James Lindsay, who holds a doctoral degree in Mathematics and is considered to be a leading authority on critical race theory (CRT), told The Epoch Times that introducing “equity” to math changes it into social theory.

“Equity means socialism,” Lindsay said. “It is literally just a rebranding of socialism.”

The “equity” agenda calls for an “administered economy that redistributes shares to create equal outcomes, and that,” he said, “is the “definition of socialism.”

His latest book, “Race Marxism: The Truth about Critical Race Theory and Praxis,” condemns CRT as a “reinvention of Marxism” that uses race as “the central construct for understanding inequality in place of economic class.”

When activists demand social justice, they’re really talking about communism, Lindsay said. But many people don’t believe this, even when the “linguistic fog of war” around social justice is lifted.

“The model of equity they’re talking about comes out of the field of public administration, and it’s called social equity theory,” he said. “Social equity is supposed to transform in the long run into social justice when it’s been enforced long enough, but that’s exactly [Karl] Marx’s vision for how socialism becomes communism.”

The Californians for Equal Rights Foundation (CFER) has urged parents and concerned citizens to reject the second draft of the framework.

“Amidst a crisis of low performance in California’s public education, the State Department of Education has chosen to disregard broad-based demands for quality and excellence by insisting on pushing a new math framework wrapped in equity,” CFER President Frank Xu said in a March 15 statement.

CFER has rejected attempts to replace a merit-based education system with an equity-based model and opposes the second draft of the new math framework because it’s “pedagogically and ideologically aligned with the dogma of equity,” according to the statement.

“The essence of such an anti-merit statewide framework is to lower standards in the name of equal outcomes, which could have disastrous ramifications on the quality of public education. The world is rapidly changing. America needs competent engineers, scientists, mathematicians, and other STEM talents, more than ever. We simply can’t allow public education to keep spinning downwards,” Xu said.