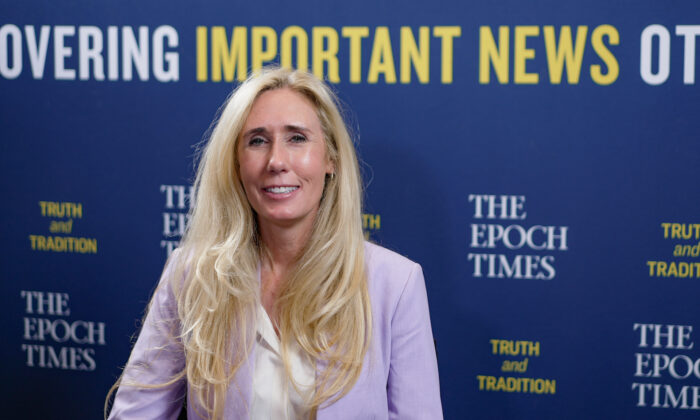 Laura Sextro, CEO and co-founder of the Unity Project, at the FreedomFest conference in Las Vegas on July 15, 2022. (The Epoch Times)
Vaccines & Safety

Laura Sextro is the CEO of the Unity Project, an umbrella organization that connects groups across America that are fighting against vaccine mandates for children and for medical freedom and parental rights.

The Unity Project is trying to prevent several California vaccine bills from becoming law. Sextro said these measures should alarm all parents because the bills’ authors appear to be trying to sneak through legislation that would erode the doctor–patient relationship, undermine parental rights, and allow unethical government overreach.

“I think it’s an incredibly nefarious and unethical extreme overreach of the government to use bills like this as a mechanism to circumvent the parents. And the unfortunate thing is that, by design, the elected officials that are authoring these bills are incredibly crafty with how they keep this discreet and under wraps,” Sextro said during a recent interview for EpochTV’s “American Thought Leaders” program.

SB 866 also allows children as young as 12 to “consent to medical care related to the diagnosis or treatment of the disease, if the disease or condition is one that is required by law or regulation to be reported to the local health officer, or is a related sexually transmitted disease,” the bill states.

“Most people in California, they don’t even know that these bills have been authored, let alone that they’re being voted on,” said Sextro.

As she looks across the U.S. political landscape, Sextro said parental rights seem to have become the new battlefield for what’s happening in the country and in the classroom.

Although healthy children are not at risk of becoming severely ill or dying of COVID-19, the Food and Drug Administration (FDA) recently released official guidelines encouraging the vaccination of children as young as 6 months old, and many school districts are mandating vaccination to attend school in the fall of 2022.

There is also SB 1479, which allocates extensive funding and other resources for COVID-19 testing in schools.

Many of the doctors most concerned about medical integrity and who oppose the mandates are working with the Unity Project, including Dr. Aaron Kheriaty, chief of medical ethics; Dr. Robert Malone, chief medical and regulatory officer; and Dr. Peter McCullough, strategic advisory council member.

Over the course of the pandemic, these doctors have been maligned for speaking out against the mainstream vaccine narrative, instead calling for the use of early COVID-19 treatments, medical freedom, justice for those who have been injured by the vaccines, and more in-depth and accurate vaccine data collection and analysis.

However, one of California’s new bills would make it legal to target doctors like Kheriaty, Malone, and McCollough and potentially strip them of their medical licenses so they can no longer practice in California. The bill is called AB 2098 and would reclassify the sharing of COVID-19 “misinformation” by doctors and surgeons as unprofessional conduct that would result in disciplinary action.

“I think that this is probably the most egregious bill that we’re seeing. It states that any doctor that goes against the COVID narrative will lose their medical license,” Sextro said.

If this bill goes into effect, it would cause doctors to become an extension of the government and Big Pharma, because they would be forced to comply with the state narrative about vaccine safety and efficacy to keep their jobs, said Sextro.

“I like to say that this is the first step in the dismantling of the medical system. You’re dismantling the doctor–patient relationship, and then you’re governing how doctors practice medicine. Doctors would no longer be free to actually truly engage in the practice of medicine, the way that it was designed to be practiced,” said Sextro.

Another bill, SB 1464, would require local law enforcement to enforce California’s health department regulations, including all of the above-mentioned government mandates and policies.

Sextro said 1464 is unbelievable because the department of health is not a legislative body.

“We’re now putting bills on the books that would state that the police would be required to enforce California department of health laws.”

Sextro also mentioned AB 1797, which would make changes to the California immunization record database and “essentially aggregate all of your immunization information into one big database,” said Sextro.

In his book, Kheriaty warns that these types of laws are the first step to the United States having a bio-identity system in which the government could track people, increasing government control and reducing medical autonomy, said Sextro.

And lastly, although the bill is on hold at the moment, AB 1993 would require all employees and independent contractors to show proof of COVID-19 vaccination to work in California. The bill does include language providing for some exceptions for medical issues and “sincerely held religious beliefs,” but does not indicate how those would be determined.

Sextro believes this bill will be reintroduced by the California Legislature at some point.

The Epoch Times reached out to California state Sen. Richard Pan, who authored or co-authored several of the bills in question.