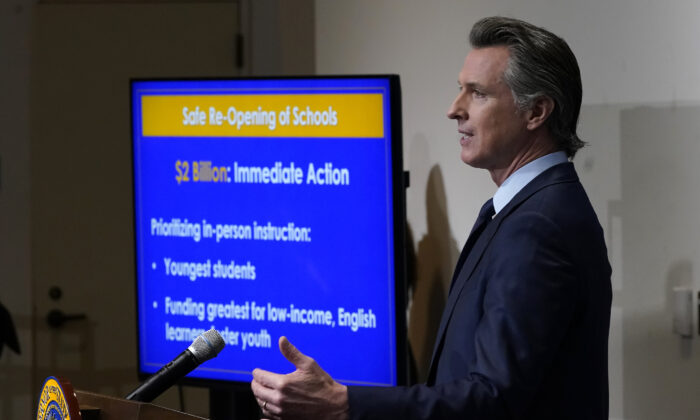 SACRAMENTO, Calif.—California would be the first state to provide health coverage to all immigrants in the country illegally under the budget Gov. Gavin Newsom proposed Jan. 10.

It’s part of his effort to address what he termed five of the most populous state’s biggest challenges in a $286.4 billion budget that builds on a surplus projected by the Legislative Analyst to be at least $31 billion. Newsom’s budget proposal uses a much bigger surplus estimate because his administration uses a different definition of what counts as a surplus.

What his administration termed “existential threats” include the surging coronavirus pandemic; wildfires and drought worsened by global warming; homelessness; income inequality including the lack of health insurance for some immigrants; and public safety, including combatting a recent flurry of coordinated smash-and-grab robberies.

California has made great strides in reducing its uninsured population in recent years, but the largest single group left behind under the state’s Medicaid program are low-income residents in the country illegally.

The state began covering immigrants 26 and under in 2019, and those 55 and older last year. Now Newsom wants state lawmakers to cover the remainder, starting no sooner than Jan. 1, 2024.

It wasn’t immediately clear if he would phase in the additional health coverage or how he planned to pay for it.

One legislative analysis put the price tag for covering the remaining donut hole of uninsured immigrants at $2.4 billion per year. Covering those age 50 and up, the most recent expansion, will eventually cost taxpayers about $1.3 billion per year.

His budget address kicks off months of haggling with his fellow Democrats, who control the state Legislature, talks that will intensify when Newsom presents an updated spending proposal in May.

Some progressive legislative Democrats last week proposed creating in California the nation’s first universal health care system, backed by steep tax hikes that would have to be approved by voters.

Newsom also has pledged to spend $300 million on boosting law enforcement efforts to combat retail theft and another $2.7 billion to spend on things like coronavirus testing and hospital staffing.

He additionally on Monday proposed spending $648 million to back wildland firefighters and buy more helicopters and bulldozers, plus another $1.2 billion on top of the current budget year’s $1.5 billion for forest management.

Another $750 million would go to drought relief, on top of the current budget year’s $5.2 billion water package.

Also on the environmental front, he pledged to keep reducing California’s reliance on fossil fuels.

To help with the ever-growing cost of living in California, Newsom proposed “doubling down” on the state’s existing plan to provide free universal pre-kindergarten; adding thousands of child care slots and boosting to before, after, and summer school programs.

He also proposed continued aid to small businesses hit hard by the pandemic by waiving fees and providing hundreds of millions in grants and tax breaks.

Newsom’s massive projected budget and surplus brings the state a long way from the gloom of 2020, when Newsom and state lawmakers cut spending, raised taxes and pulled money from the state’s savings accounts to cover what they feared would be a pandemic-fueled $54 billion deficit.

Newsom has also promised to substantially increase spending on infrastructure, including things like roads and bridges. These types of projects are good ways to spend surplus money—which is only available for one year—because they don’t have recurring costs that must be funded every year. Another advantage is infrastructure spending does not count toward the state’s constitutionally-set spending limit, meaning it can offset other spending to help lawmakers stay under that cap.

Nationally, people will be watching closely to see how Newsom wants to spend money to increase access to abortion. The U.S. Supreme Court is considering whether to overturn or significantly weaken Roe v. Wade, the landmark decision that forbids states from outlawing abortion. If that happens, as many as two dozen other states could pass laws outlawing or restricting access to abortion.

Last year, Newsom convened a group of more than 40 abortion providers and advocacy groups to ask for their ideas on what to do should that happen. In December, the group released 45 recommendations. They include spending money to help clinics hire more workers and funding to reimburse abortion providers for patients who can’t afford to pay — including those who travel to California from other states.

In an interview with The Associated Press last month, Newsom indicated some of the report’s recommendations will be included in his budget proposal.