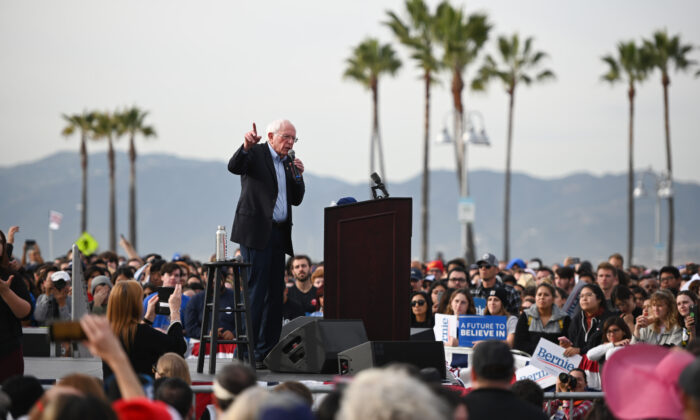 The Golden State is living Sanders’s vision for America

Some guests just won’t leave on their own. Like the movie “Weekend at Bernie’s,” California has been dragging the rank corpse of socialism around for the past couple of decades and, needless to say, it’s starting to stink up the joint.

Getting rid of it is the task before California, which it will undoubtedly fail to do. But if unrepentant socialist Sen. Bernie Sanders becomes the Democratic presidential nominee, well, California is a preview of what’s to come if he’s elected.

About 20 years ago, Sanders-style socialism stopped in for a return visit to California and never left. You could say that it has “fundamentally transformed” the state into something almost unrecognizable. You could also say that socialism has treated the state the way a frat party treats a beach rental.

Indeed, the consequences of the Bernie-style socialist policies from Sacramento are as tragic as they are unnecessary. With its high-tech economy in Silicon Valley and throughout the state, as well as the entertainment industry, world-class wineries, defense corporations, and more, California is the richest state in the nation.

And yet, it also has the highest personal income tax rate in the country and sadly, the highest poverty rate. Not Alabama, nor Mississippi, nor Arkansas, nor any other flyover state that the left loves to berate is the national poverty leader, but California.

Walking Out of the Golden State

The answer is predictable and frustrating.

By providing the most generous social benefits for anyone and everyone, California attracts the poor and the drug-addicted from all points on the compass and from both sides of the border. Additionally, sanctuary cities protect, aid, and financially support illegal immigrants as they take advantage of America’s greatest welfare state. Not surprisingly, about one-third of Americans on welfare live in California.

Of course, that’s not all that socialist California can boast about. The richest state in the country also has people leaving it in record numbers.

But, unlike the Great Depression, when the poor Dustbowl Okies and Texans came to California to find a better life, it’s not a flood of jobless poor people who are leaving California. No, the people leaving today have jobs and own businesses in the greatest boom economy of the past 50 years.

The irony is as rich as it’s pathetic: People are leaving California for a better life elsewhere, and taking their businesses, their skills, and their money with them. To pay for all of those benefits, the State of California taxes and fees its producers, the folks who work hardest for a living, who open and run their own businesses, to the point of extinction.

“It’s really two different worlds. That’s why so many that have the ability to are getting out,” he said, according to Fox 5 San Diego.

Recently minted ex-Californians are showing up in Arizona, Nevada, Idaho, and the most popular choice, Texas. As a result, California’s population is actually falling, and therefore, thankfully, so is its congressional representation. In 2019 alone, almost 200,000 people left the state.

And yet, even with its decreasing population, California has the most acute housing shortage problem in the country. Could that be due to the soaring costs of obtaining building approvals and the high regulatory, anti-business climate? According to Heritage Foundation senior policy analyst Adam Michel, that’s exactly the case. California laws actually prevent housing from being built.

Meanwhile, the only other thing booming in California other than employment, the exodus, and real estate prices, is homelessness. Why is it that more people are living—and dying—on the streets in our high-performing economy in 2020 than were during the Great Recession of 2008–09? In fact, more than 25 percent of all homeless in the country live in that socialist paradise of … California.

Isn’t socialism supposed to protect the middle class, allow housing to be built, and eliminate homelessness? It is, according to Bernie, who said, “The middle class and the working families who produce the wealth of America deserve a fair deal.”

Does that “fair deal” include taxing the middle class into oblivion?

Like the aforementioned frat party at the beach rental, California is living the dream of Bernie’s big socialism, and it ain’t pretty. Like Sanders, Sacramento has no answers, except to do more of the same—take more tax money from fewer taxpayers and raise the costs of doing business and add more people to the welfare rolls.

As long as Sanders-style socialism runs the California show, the show will be run into the ground. As California’s decline into socialism progresses, it takes zero responsibility for its failures, even as it seeks to take everything you work hard to achieve.

It’s a sad reality, but nonetheless, it’s the way things are. Socialism has come to California and is now ruling in Sacramento as well as sleeping in the streets, underpasses, and public parks from San Francisco to San Diego.

Economic Growth Is a Choice

As the Trump administration continues to demonstrate, economic growth is no accident. It’s a choice. But so, too, is economic stagnation and social decay, as California finds itself face down in the ditch of socialist policies.

There’s a lesson to be learned from this dismal truth, and it has everything to do with the choice we have in the upcoming election. And it really doesn’t matter if it’s Sanders, Joe Biden, or even Michael Bloomberg who gets the Democratic nomination—all of them will seek to apply California’s socialist economic policies upon the rest of the nation.

One long weekend with Bernie is enough.