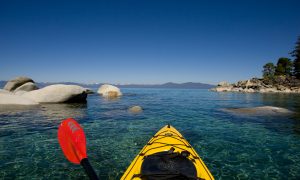 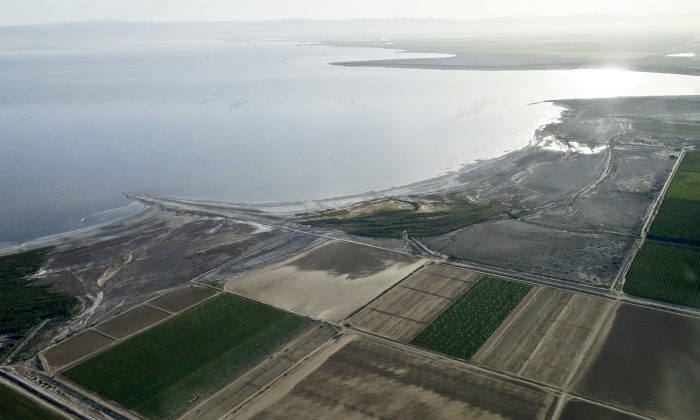 Exposed lake bed of the Salton Sea dries out near Niland, Calif. San Diego and other Southern California water agencies will stop replenishing the lake in 2017, raising concerns that dust from the exposed lake bed will exacerbate asthma and other respiratory illness in a region whose air quality already fails federal standards. (AP/Gregory Bull)
US

SALTON CITY, Calif.—Once-bustling marinas on shallow water in California’s largest lake a few years ago are bone-dry. Carcasses of oxygen-starved tilapia lie on desolate shores. Flocks of eared grebes and shoreline birds bob up and down to feast on marine life.

An air of decline and strange beauty permeates the Salton Sea: The lake is shrinking — and on the verge of getting much smaller as more water goes to coastal cities.

San Diego and other Southern California water agencies will stop replenishing the lake after 2017, raising concerns that dust from exposed lakebed will exacerbate asthma and other respiratory illness in a region whose air quality already fails federal standards. A smaller lake also threatens fish and habitat for more than 400 bird species on the Pacific flyway.

Many of the more than 10,000 people who live in shoreline communities cherish the solitude but now feel forgotten. The dying lake must compete for water as California reels from a four-year drought that has brought sweeping, state-ordered consumption cuts.

Julie London, who moved to Salton City after visiting in 1986 from Washington state, hopes for help for the periodic, rotten odor from the lake that keep residents inside on hot, fly-filled summer nights. The stench in 2012 carried more than 150 miles to Los Angeles.

“Unfortunately, that’s the only time anyone will listen because we don’t have a voice,” London, 60, said on her porch, one of the few that still lies a stone’s throw from water. “You can scream all you want. Nobody cares.”

San Diego now purchases more than one-quarter of its water from California’s Imperial Valley, where fields produce runoff that delivers 70 percent of the lake’s inflows. More water for San Diego means less for the Salton Sea.

In 2003, the state Legislature agreed to spearhead efforts to restore the lake to help seal the San Diego sale. California, which used more Colorado River water than it was entitled to, was under enormous pressure to go on a water diet after Sunbelt cities like Phoenix and Las Vegas clamored for their share.

The San Diego County Water Authority and other local agencies agreed to deliver water to the Salton Sea for 15 years while the state developed a long-term fix. This year, that water accounts for 10 percent of the lake’s inflows.

With no fix in sight, the Imperial Irrigation District asked state regulators in November to condition San Diego sales on the state fulfilling its promise, citing the state legislation and the state’s open-ended contractual commitment to pay for offsetting environmental damage.

The 2003 contract to sell water to San Diego for up to 75 years still deeply divides Imperial Valley farmers, who grow much of the nation’s winter vegetables.

Imperial Valley gets nearly 20 percent of Colorado River water distributed in the western United States and northern Mexico — enough for more than 6 million households — but some growers fear cities will eventually suck their fields dry.

Bruce Kuhn, who cast the deciding vote for the San Diego sale as a board member of the Imperial Irrigation District in 2003, said he would have opposed the deal without the state’s pledge to the Salton Sea.

Kuhn lost his re-election bid; revenues at his farm services business slid about one-third. “It cost me business and it cost me friends,” he said.

The lake is often called “The Accidental Sea” because it was created in 1905 when the Colorado River breached a dike and two years of flooding filled a sizzling basin that today is about 35 miles long, 15 miles wide and only 50 feet deep. The lake, which has no outlet, would have quickly evaporated if farmers hadn’t settled California’s southeastern corner.

Viewed from the air, the Imperial Valley’s half-million acres of verdant fields end abruptly in pale dirt. Colorado River water is diverted near Yuma, Arizona, to an 82-mile canal that runs west along the Mexican border and then north into 1,700 miles of gated dirt and concrete channels that crisscross farms. When gates open, water floods fields and gravity carries increasingly salty runoff downhill through the New and Alamo rivers to the Salton Sea.

The lake has suffered a string of catastrophes since tropical storms in the late 1970s destroyed houses, marinas and yacht clubs, ending an era of international speedboat races and glamor that once drew more visitors than Yosemite National Park. Botulism killed large numbers of pelicans in 1996.

Fish kills have happened regularly since nearly 8 million croaker and tilapia died in 1999. The water is nearly twice as salty as the Pacific Ocean, endangering remaining tilapia. Winds that stir hydrogen sulfide gas from the lake’s bottom strips oxygen from surface waters where fish swim and creates stenches similar to rotten eggs.

The lake’s fragile state was on display one spring afternoon as thousands of tilapia washed ashore. A white mist rising from the placid waters was evaporation. Great blue herons took flight, while American coots skimmed the surface.

“There are no other places for them to go,” Chris Schoneman, project leader of the Sonny Bono Salton Sea National Wildlife Refuge, said aboard a flat-bottomed vessel, one of a few boats fit to navigate waist-high waters. Residents say speedboats were last seen about four years ago.

A cluster of small, gurgling “mud pots” is tucked away on salt-crusted lakebed that was covered with water less than 10 years ago — evidence of magma from the earth’s center rising through shifting tectonic plates. Another cluster in the lake’s center produces bubbles that look as if a boiling cauldron lies beneath the surface.

Steam billows from about a dozen shoreline geothermal plants. They provide few jobs but land royalties — some paid to Imperial Irrigation District — have been touted as a potential solution for the lake.

The nonprofit Pacific Institute estimates that surface area of the 350-square-mile lake will shrink 100 square miles by 2030, salinity will triple over 15 years, and fish will disappear in seven years without intervention. San Diego’s water purchases from Imperial Valley — which ramp up to 2021 — are to blame but low rainfall and water conservation also hurt.

Al Kalin, who farms 1,800 acres near the shore, installed sprinklers to replace flood irrigation and soil measurement devices that tell him when to water. His farm sits near one of several reservoirs that capture runoff for urban Southern California before it goes to the Salton Sea.

“We’re kind of between a rock and a hard spot,” said Kalin. “We’ve got to conserve water for the thirsty people, 17 million in Southern California. At the same time, there’s concern about the Salton Sea because it’s rapidly declining because of our conservation efforts.”

Students at Desert Mirage High School in Mecca who have been strategizing after class how to bring attention to the Salton Sea shared stories with state regulators at a March hearing in Sacramento. Respiratory complaints are common in the small town of Latino farmworkers who fill a new Catholic church for Sunday Mass.

Jose Alcantara got involved for his mother, Blanca Sanchez, whose bronchitis worsened after she moved in 2010. She rushes to her car for her inhaler while picking crops and skips work when the air is bad.

“That’s why I worry,” said Alcantara, 17, whose family lives in a stucco apartment complex near fields of peppers, corn and citrus. “I don’t want to see my mother in a casket.”