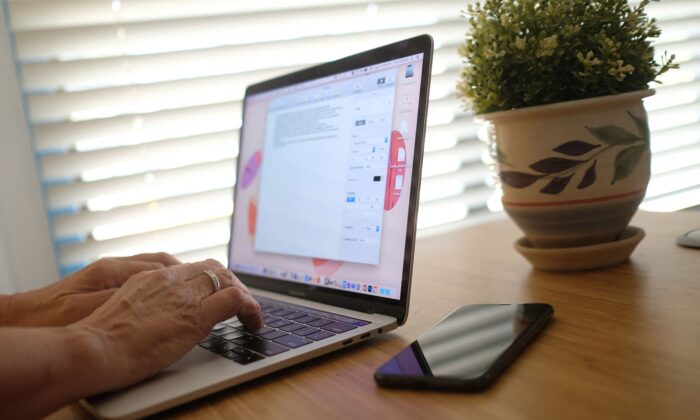 A person works on their laptop from a home office in Los Angeles on Aug. 13, 2021. (Chris Delmas/AFP via Getty Images)
Viewpoints

In my now 35 years of writing on California government, a constant refrain is state government computer problems—ironically located in the state that’s still considered the center of the global computer and internet revolutions.

This was always a concern of then-state Sen. John Moorlach (R-Costa Mesa), when I worked for him as press secretary until 2020, before voters replaced a green-eyeshades CPA with a rubber-stamp radical leftist lawyer. How can a government with a $200 billion-plus budget run on inaccurate or nonexistent numbers?

Moorlach himself wrote in The Epoch Times about a similar problem, the delinquency of state controller Betty Yee again on the Comprehensive Annual Financial Report (CAFR) for fiscal year 2019-20, which ended on June 30, 2020—more than 18 months ago.

The first problem with FI$Cal is the cutesy name, which needs to be changed. Why does the state do this? A similar problem is with Medi-Cal, which sounds like “medical,” but is the state’s iteration of Medicaid. The Medi-Cal name also easily is confused with Medicare, the federal system for seniors and the disabled.

Anyway, FI$Cal is supposed to tie together all the state’s financial and budget systems. Tilden says the process began in 2005 and includes “the IT systems used by the State Controller and other departments.” So the Controller again is involved in another problem.

The utility of a working state financial system is obvious, as it is for getting CAFRs finished on time. Accurate numbers are needed by the Legislature as it fashions a budget every year, as well as by those doing business with the state, journalists, and concerned citizens.

This is especially true given California’s long history of budget swings. It goes from massive surpluses, as today and in the late 1990s during the dot-com boom, to massive deficits, as after the dot-com bust of 2000-01 and the sub-prime meltdown of 2007-10.

Tilden finds FI$Cal will not meet its June 2022 deadline to finish. And get this, “A final step involves the State Controller’s Office comparing the data produced by FI$Cal for the State’s annual comprehensive financial statements [CAFR] to its legacy system and verifying the data’s accuracy. However, this verification process has fallen behind schedule, and the project office had not released a new schedule as of December 2021.”

The state’s finances are a governmental Enron, yet nobody is being held accountable. The voters are supposed to, but have been AWOL in the one-party state known as California. The last Republican controller was Houston I. Flourney, who left office on January 6, 1975—47 years ago, when Gerald Ford was president and Chairman Mao was the dictator of the People’s Republic of China.

Tilden again: “For the third consecutive year, the State will issue late financial statements, resulting in part from state agencies’ challenges in using FI$Cal. Timely financial reports are important for the State to maintain a high credit rating and access to federal funding.”

Here’s the report’s graph of the CAFR tardiness:

Unfortunately, the delinquency is going to continue. That’s because, like arteriosclerosis of the arteries, which involves plaque clogging the artery walls, California government is clogged with waste and incompetence. And the government keeps chowing down on the glazed donuts.

Tilden concluded, “The likelihood that the volume of work to maintain FI$Cal will increase in the near future as more agencies use the system, creates the risk that the department will be unable to provide all necessary support and maintenance functions after the project’s official end date.”

Of course, there is a way to make the system work better: Sharply shrink the “volume of work”—the size of state government. According to KFF, a health-care information website, for fiscal year 2019—the last year with a California CAFR—the state government of California spent $7,604 per capita.

But Florida spent $3,845, half as much; and Texas, $4,174. That’s how they can have no state income tax. Yet those states’ roads are better and their kids perform better in schools. California would better off ditching its own state government and “contracting out” all operations to those states.

California Government ‘Does Not Compute’

“Does not compute” is a cliché from old movies about the early days of computers breaking down. A dot-matrix printer would pump out a sheet of paper with those words on it.

Here are some other problems I recall.

One was a disastrous 1995 DMV computer project. After DMV Director Frank Zolin finally killed the $50 million project, he was forced to quit.

More recently, during the 2020 COVID-19 lockdowns, the Employment Development Department’s computer problems led to hundreds of thousands of newly unemployed workers not getting their needed checks, paid for by their own taxes, for months.

Working in Moorlach’s office at the time, I saw the pain firsthand. Although our great staff did most of the work helping these poor people when they called our office, I pitched in when needed. It was heart-rending to hear their suffering, because the government couldn’t get its computers working properly.

These computer problems hurt real people. But when will they be fixed, if ever?