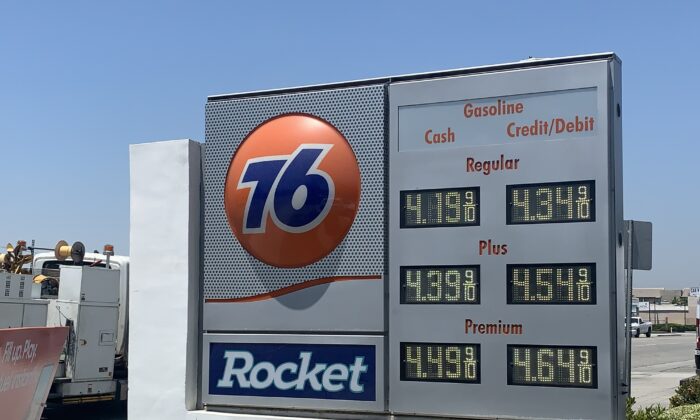 California’s Gas Prices Highest in the US Before Independence Day

As Independence Day approaches, California’s gas prices have hit a record-high since 2014.

According to the American Automobile Association (AAA), the national average gas price on July 1 is $3.123 per gallon but California’s average price for regular gas was $4.284, which was $1.535 higher than in Mississippi. The Golden state’s average price of a gallon of premium gas was $4.595.

Carol Chiang lives in Orange County. She works in Los Angeles County and drives nearly 100 miles every day to work. She said that the rising gas prices have added more stress to her life.

California had an automatic gas tax hike on July 1 that means drivers now have to pay 51.1 cents per gallon in state taxes—the highest gas tax in the country.

This tax originates from the Road Repair and Accountability Act of 2017. It demands a progressive rise in tax for gas and was estimated to generate for the government $5.2 billion annually in additional revenue. The government said the money would be invested in transportation projects, but critics say that California’s infrastructure and transports did not improve from the investment.

The national average gas price have begun to rise again—to 2.5 cents more per gallon from last week—according to data from GasBuddy.

Patrick De Haan, head of petroleum analysis at GasBuddy, said in a statement, “As we approach July 4, it appears the only way forward is for gas prices to continue to rise as Americans’ insatiable demand for gasoline continues to act as a catalyst.”

AAA forecasts a record-breaking 43.6 million Americans will travel during the holidays. “Road trippers will pay the most to fill up for the holiday since 2014.” AAA spokesperson Jeanette McGee said in a statement.

AAA expects the rise in crude oil prices to continue after the holiday and may eventually stop near the end of summer.