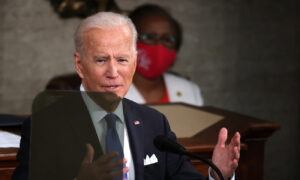 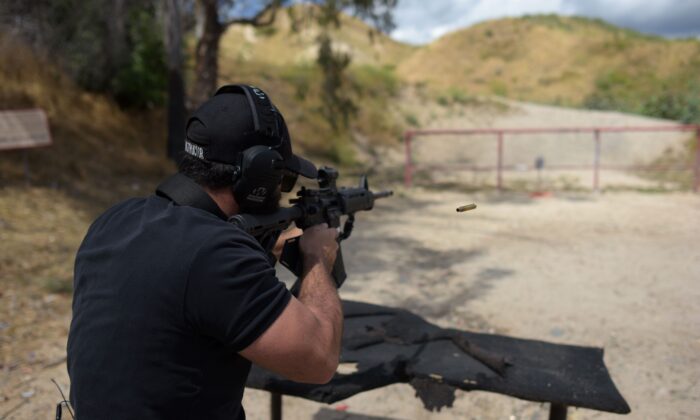 A man shoots an AR-15 style semi-automatic rifle during a demonstration at the Angeles Shooting Ranges in Pacoima, Calif., on May 20, 2019. (Augustin Paullier/AFP via Getty Images)
US News

The state government, through the law, “bans an entire class of very popular hardware—firearms that are lawful under federal law and under the laws of most states and that are commonly held by law-abiding citizens for lawful purposes,” U.S. District Judge Roger Benitez, a George W. Bush appointee, wrote in his 94-page ruling in Miller et al. v. Bonta et al.

James Miller, a California resident who has a concealed carry permit, sued the state’s top law enforcement official in 2019 over the laws, alleging they violate his Second Amendment rights.

“Plaintiff Miller seeks to use his lawfully acquired large-capacity magazine(s) in his California-compliant, ‘fixed magazine rifle.’ However, Plaintiff Miller is prevented from lawfully doing so without risk of persecution resulting in injury to his life and liberty; and the unlawful confiscation and loss of his personal property because said use would reclassify his rifle as a prohibited ‘assault weapon,'” the lawsuit stated.

Xavier Becerra, the attorney general at the time—who has since become President Joe Biden’s health secretary, and has been replaced by Rob Bonta—argued that the plaintiff lacked standing and that all federal circuit courts had previously upheld the constitutionality of assault weapon restrictions such as the laws in question.

But Benitez said the Supreme Court recognizes “that the Second Amendment guarantee includes a right to keep and bear firearms that have ‘some reasonable relationship to the preservation or efficiency of a well-regulated militia,'” quoting from Miller’s filing.

He referenced the Supreme Court’s ruling in District of Columbia v. Heller, which broadly found that the Constitution protects Americans’ rights to own guns.

“The Heller test asks: is a modern rifle commonly owned by law-abiding citizens for a lawful purpose? For the AR-15 type rifle, the answer is ‘yes.’ The overwhelming majority of citizens who own and keep the popular AR-15 rifle and its many variants do so for lawful purposes, including self-defense at home. Under Heller, that is all that is needed. Using the easy to understand Heller test, it is obvious that the California assault weapon ban is unconstitutional. Under the Heller test, judicial review can end right here,” Benitez wrote.

The Firearms Policy Coalition (FPC), a nonprofit that advocates for constitutional rights, said the ruling was the correct one.

“In his order today, Judge Benitez held what millions of Americans already know to be true: Bans on so-called ‘assault weapons’ are unconstitutional and cannot stand,” said Brandon Combs, FPC president, in a statement. “This historic victory for individual liberty is just the beginning, and FPC will continue to aggressively challenge these laws throughout the United States. We look forward to continuing this challenge at the Ninth Circuit and, should it be necessary, the Supreme Court.”

But others, such as California Gov. Gavin Newsom, disagreed with the ruling.

“Overturning CA’s assault weapon ban and comparing an AR-15 to a SWISS ARMY KNIFE is a disgusting slap in the face to those who have lost loved ones to gun violence,” Newsom, a Democrat, said late on June 4. “This is a direct threat to public safety and innocent Californians. We won’t stand for it.”

An appeal to the ruling will be forthcoming, according to the current California attorney general.

“Today’s decision is fundamentally flawed, and we will be appealing it. There is no sound basis in law, fact, or common sense for equating assault rifles with Swiss Army knives,” Bonta said.

The decision was stayed for 30 days to allow Bonta to appeal it; he said he will be appealing the ruling.