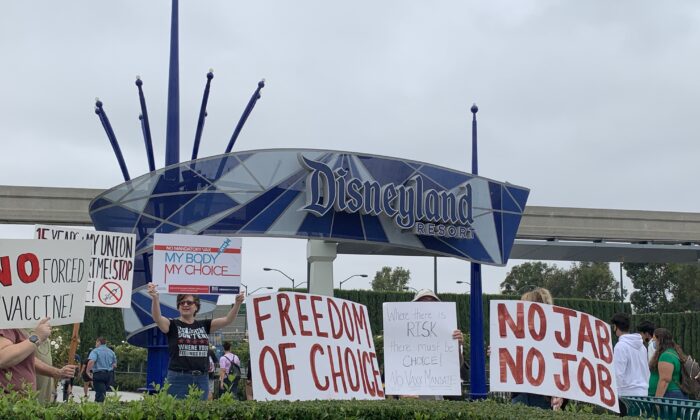 A group of Disneyland employees and local residents gathered in front of the Disneyland Resort in Anaheim, California, to protest the company's vaccine mandates on Sept. 26, 2021. (Linda Jiang/The Epoch Times)
Southern California

Californians Protest Against Vaccine Mandate in Front of Disneyland

In August, the company further announced that it had reached an agreement with the union that all unionized employees at Walt Disney World in Florida are required to be vaccinated by Oct. 22.

To protest the vaccine mandates, a small group of Disneyland employees and local residents gathered in front of the Disneyland Resort in Anaheim, California, on Sept. 26.

Some were holding up homemade banners that read: “Freedom of Choice” “NO JAB, NO JOB” “My Body, My Choice” “NO Forced Vaccine!” “Where there is RISK, there must be CHOICE!” “NO Vaxx Mandate.”

The Epoch Times spoke with some of them about their reasons for rejecting COVID-19 vaccines.

Anthony Lenge, a Disney employee, said that getting vaccinated should be one’s own choice. People should have the freedom to get the vaccine and should also have the right to refuse it.

“If you want to get the vaccine, great! I choose not to, but my job should not be threatened because of that,” Lenge told The Epoch Times.

Lenge said the vaccines have many risks, and we still don’t know what the long-term ones are.

He explained that he has medical conditions that put him at a higher risk of having complications from the vaccine. But his doctor had told him that she wouldn’t write a medical exemption for him because she would be sanctioned by the state if she did. So now he feels he doesn’t have a choice.

Lori, a woman who only gave her first name and said she’s a psychologist, told The Epoch Times that there’s a lack of authoritative reports supporting COVID-19 vaccines, which are still experimental.

“I’ve done a lot of research; our family, we’re all researchers,” she said.

Lori said, while all drugs have side effects, she’s seen a professional study that reports disturbing adverse reactions to the COVID-19 vaccines.

“It takes a long time to get to know what the consequences of these vaccines are,” Lori said, adding that hopefully there won’t be any, because a lot of people have taken the vaccines. “But we’re not willing to risk our families or our own lives with problems in the future,” she said.

According to the Centers for Disease Control and Prevention (CDC) website, adverse COVID-19 vaccine reactions include blood clots, myocarditis, pericarditis, Guillain-Barre syndrome (GBS) which can lead to paralysis, and even death.

As of Sept. 15, VAERS also received reports of 1,491 cases of myocarditis or pericarditis in COVID-19 vaccinated people who are 30 years old or younger. Among these reports, 890 have been confirmed by the CDC and the U.S. Food and Drug Administration (FDA).

When announcing the COVID-19 vaccine mandate, Disney said the health and safety of their employees is always of paramount importance during the pandemic. All employees are required to be vaccinated because COVID-19 vaccines protect people against severe reactions to the virus, according to scientists and health officials.

A new study by a team of researchers led by Dr. Tracy Hoeg, an epidemiologist at the University of California, Davis, found that the two main COVID-19 vaccines used in the United States, Pfizer and Moderna, are more likely to cause hospitalization of teenage boys than the virus itself.

The Epoch Times contacted Walt Disney for comments but did not receive a reply before publication time.