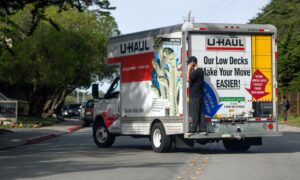 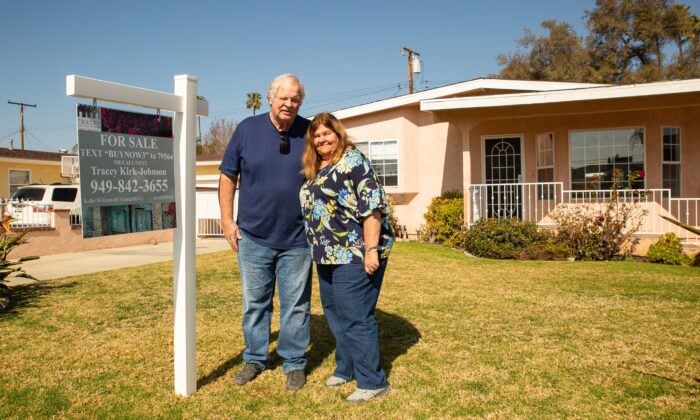 John Peterson and his wife stand next to a for-sale sign on their lawn in Garden Grove, Calif., on Feb. 7, 2021. (John Fredricks/The Epoch Times)
Southern California

Californians Part of ‘Cal-Exit’ Say Why They Left

Mike Kimmel and his wife, native Californians, moved to Arizona last year. Kimmel speaks of his love for California—but in the past tense.

“We loved the area and state we were born in,” he told The Epoch Times via email. “The beauty and diversity of the state stayed constant across those years. But the taxes and government regulation became overly excessive and unfair. LA County became a huge, overcrowded, traffic- and crime-filled monstrosity.”

Kimmel said the community they moved to in Arizona has fewer crowds, access to the outdoors (a large national park is “literally in our backyard”), reasonable government regulation, a lower cost of living, and lower taxes.

“A vast majority of our neighbors are Cali refugees,” he said. “This includes many from Long Beach and the surrounding areas. There are three people in the community from my same high school and many from our church in Long Beach.

“We miss our neighbors and friends in Cali, but love our decision to be part of Cal-Exit.”

In 2020, a surge of Californians left. It was classified as an outbound state, with more people moving out than in, for the first time since 1995 by Atlas Van Lines in the moving company’s 2020 Migration Patterns Study.

Arizona is a popular destination. It was second only to Texas in receiving the most new residents from California in 2019, according to U.S. Census data.

California isn’t the only state that’s showing higher numbers of people moving out during the pandemic, according to recent U.S. migration studies.

A National Association of Realtors study showed that, as of October 2020, 8.93 million people in the United States had relocated since the pandemic began. That’s an increase of about 94,000 people over the same time period in 2019.

John Peterson has lived in Southern California all his life, but he’s headed for Laughlin, Nevada, in March.

“I’m a native Californian. I love this state,” he told The Epoch Times. “I think the Democrats have gotten out of control. This lockdown is way out of control.”

“We almost made a decision to stay in California, then the pandemic hit,” Peterson, 67, said. “I saw the way [Gov. Gavin] Newsom was handling it. I knew there were going to be serious problems.”

He had contemplated leaving before, because “I really wanted to retire and I was afraid, afraid of the [worsening] economy and afraid of the whole taxation system, because every time you turn around there is another tax.”

Peterson, who has worked for a flooring company for the past 12 years, said he’s been especially worried about property-tax changes that would mean “I wouldn’t be able to afford to live here anyway.”

“Some things in the state need to change, and I really don’t see that happening with the present governor. It really doesn’t matter whether it’s a Republican or a Democrat [as governor], but there’s a lot of things that need to be changed in California.”

The Petersons are selling their house in the Orange County city of Garden Grove and have already bought a house in Laughlin.

It’s been tough to accept that most of their family remain in Orange County, but knowing that their new home is “just a four-hour drive” makes it more palatable, Peterson said.

The growing number of people wanting to move out of California has realtors looking for those wanting to sell. A realtor from Temecula, who preferred not to be named, is among those who have created social media groups to connect with such people.

He set up a private Facebook group with “leaving California” as the theme. He told The Epoch Times that many posts from members on the page say they’re leaving because of the state’s “failed” political leadership.

A year ago, about five people per day were joining the group, the realtor said. Since the presidential election, about 45 people per day have joined.

He said, “70 to 80 percent of the people on the site tend to be conservative and unhappy with the politics.

“Some people will complain that it’s the gas prices and high taxes that [have them moving out]. But it has definitely been overwhelmingly political reasons. Recently, I’ve seen just a ton of negativity towards Newsom during the [effort to recall the governor]. … People are very unhappy with the governor and the way he’s handled the [COVID-19] lockout.”