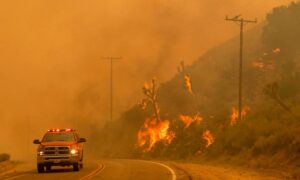 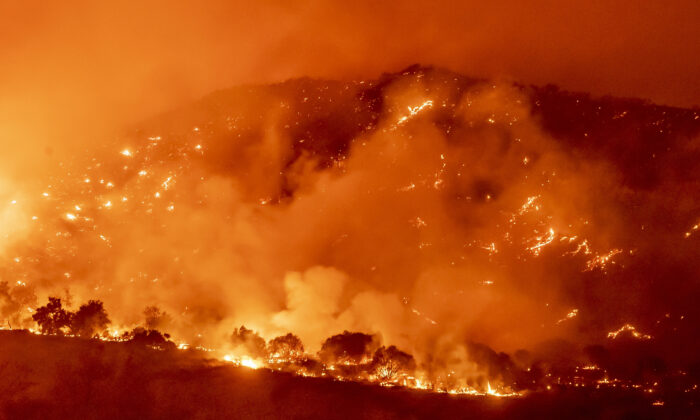 It exploded in size throughout the night and as the sun came up, an enormous plume of smoke was visible for miles.

Firefighters struggled in steep terrain amid unpredictable Santa Ana winds that have raised fire danger for much of the region.

Evacuations were ordered for several canyon neighborhoods near the city of Lake Forest and residents of other nearby areas were told to be ready to get out. It was not immediately known how many people were affected or if any homes were damaged.

The Bond Fire about 50 miles southeast of Los Angeles is burning near the same area of October’s Silverado Fire, which forced tens of thousands of people to evacuate.

The new blaze broke out as Southern California utilities cut the power to tens of thousands of customers to avoid the threat of wildfires during the notorious Santa Anas.

Red flag warnings of extreme fire danger through Saturday were in place because of low humidity, bone-dry brush, and the winds, which sweep down from the interior, the National Weather Service said.

Utilities in the populous region began cutting power Wednesday to customers as a precaution to prevent gusts from blowing tree limbs into electrical equipment or knocking down power lines, which have sparked devastating wildfires in recent years.

Southern California Edison cut power to about 15,000 homes and businesses by late Wednesday night and was considering de-energizing lines serving about 271,000 customers in seven counties throughout the windy period, which could last into Saturday.

It was one of the utility’s largest precautionary blackouts.

San Diego Gas & Electric pulled the plug on about 24,000 customers by Wednesday night with another 73,000 in the crosshairs.

“We recognize losing power is disruptive, and we sincerely thank our customers for their patience and understanding,” the utility said.

A blaze on about 15 acres in San Diego County threatened about 200 homes and officials were working to evacuate them, said Capt. Thomas Shoots with Cal Fire, California’s state firefighting agency.

Nearby apartments were under evacuation advisories. The fire reported late Wednesday had damaged some homes, KGTV reported.

California already has experienced its worst-ever year for wildfires. More than 6,500 square miles have been scorched, a total larger than the combined area of Connecticut and Rhode Island. At least 31 people have been killed and 10,500 homes and other structures damaged or destroyed.