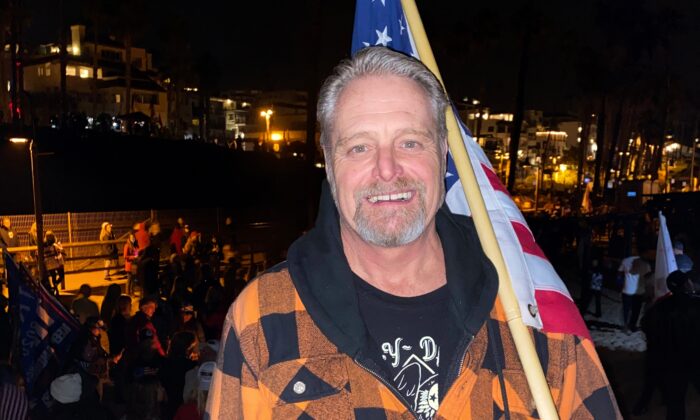 SAN CLEMENTE, Calif.—As a statewide overnight curfew took effect in California on Nov. 21, hundreds of people around the state gathered to defy the rules and oppose the stay-at-home order.

The curfew was imposed by Gov. Gavin Newsom in response to rising COVID-19 cases throughout the state and nation. The curfew requires Californians, with the exception of on-the-job essential workers, to bunker down from 10 p.m. to 5 a.m.

“We’re here tonight in defiance of Newsom’s tyrannical lockdown and curfew orders, and to come to the streets as Americans, and utilize the Constitution to clearly showcase that we will not comply,” Russ Taylor, who organized the event, told The Epoch Times.

Taylor, 39, of Mission Viejo, created a Facebook group called California Curfew Breakers to defy the lockdown. In a few days, it had more than 1,500 members. He coordinated with people in 15 locations across the state to host their own curfew defiance rally Nov. 21.

“The incredible part is that in less than 12 hours, I was able to work with about 20 individuals from Sacramento down to San Diego, from Huntington Beach and San Clemente all the way out to Riverside and Temecula,” Taylor said.

“We had leaders that stood up and they all basically put together a similar experience where they came out past the curfew in defiance. They burned masks and they came together as Americans. That happened all up and down the state of California today.”

The event began at the top of a San Clemente hill, where protestors spoke out against Newsom, the lockdowns, and eight months of restrictions that came as a result of the COVID-19 pandemic.

At exactly 10:01 p.m., led by a ceremonial knife fire dancer, the group descended the hill and tossed their masks in a bonfire.

“We basically called everybody out to burn their masks at exactly 10:01 p.m. in defiance of the curfew, and in defiance of the mask [mandates],” Taylor said. “I actually don’t have a mask, so I had to borrow one from someone to burn.

“I think that these types of nights are going to continue over and over until our liberties are restored, and until this ‘socialist adventure’ comes to an end.”

“[We are here to address] a citizens’ cry for freedom, the lockdowns, our insane communist governor, and just a general sense of personal responsibility and accountability to myself and my kids’ future,” Smith told The Epoch Times.

“We decided, literally 48 hours ago, that this was something we had to do. And the moment demanded it, and patriots expected it. You never know what you need to do until you’re called to do it, and the clarity comes fast and sharp.

“We’re feeling the pressure of all the damage that’s been done over the past seven months of this insanity, with an attempt to take over our lives and our children’s lives, our daily routine, and our character. It was the perfect combination of everything people were thinking but couldn’t express,” Smith said.

He said the restrictions show the governor has no respect the ability of Americans to make decisions for themselves and their families.

The curfew, he added, is in name only. Orange County Sheriff Don Barnes issued a statement Nov. 20, indicating that he wouldn’t enforce the state-imposed curfew.

Said Smith: “There will be no curfew honored here. Our law enforcement, our local legislators are completely against it. And for the first time in this pandemic, the citizens aren’t the only ones fighting.”

“We’ve actually been protesting Gavin Newsom’s lockdown since Easter Sunday,” he said. “So, a month after the lockdown happened, basically we could sniff out the nonsense and started protesting. And then we would have never guessed that nine months later, we’d still be doing this. And yet here we are.”

He said he hopes the event inspires others to resist.

“If 40 million Californians just said no to Gavin Newsom and went back to work, opened their businesses, restaurants, bars–everything just opened–Gavin Newsom would be sitting up there on his throne in Sacramento completely neutered,” Hostetter said.

He believes COVID-19 is less harmful than the flu overall and that young children witnessing all of this right now could grow up to be “neurotic germophobes.”

Syndie Ly, another rally attendee, told The Epoch Times via email: “Where is the scientific evidence that lockdowns work? The data speaks for itself. Those who are at risk are [older than] 70 years old, so let’s protect these people. The fatality of this age group is 3–5 percent. Most of the economy is dependent on spending by those below age 70 so we need to open up our economy.”

A woman who goes by the alias Patriot Biker Barbie attended the rally to unite with other like-minded people around the issue of the curfew and lockdown.

Mark Larsen, 59, of Lake Forest, who works in finance, said he attended the rally to exercise his First Amendment right to assemble freely.

“The Constitution allows us to do that, and governors don’t have the power to just at-will change that,” Larsen told The Epoch Times. “I think the biggest pandemic in this nation right now is not the virus, but a virus of fear. I think that too many people don’t have enough information, and they’re buying into whatever they tell them. I’m not one of those people.”