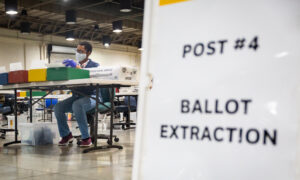 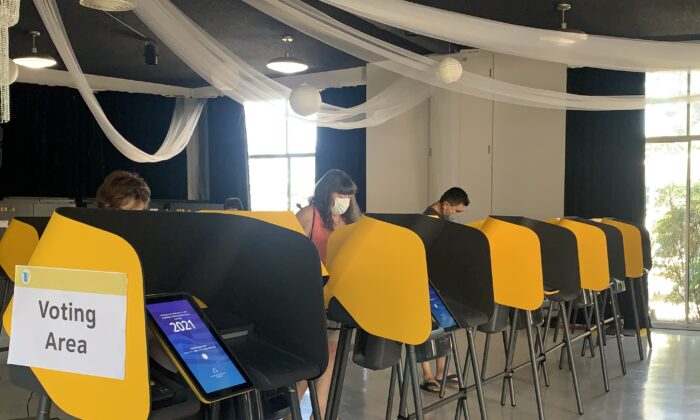 Many counties in California on Sept. 4 began early in-person voting for the upcoming recall election to remove Democratic governor Gavin Newsom, which is set to take place on Sept. 14.

The ballot for voters has only two simple questions:

1) Shall GAVIN NEWSOM be recalled (removed) from the office of governor?
2) If the governor is recalled, who do you want to replace him?

If 50 percent or more of the voters vote “yes” on the first question, the recall is successful and Gov. Newsom will be removed from office. The replacement candidate who gets the most votes is elected for the remainder of the term of office (through Jan. 2, 2023).

If the majority of the voters vote “no” on the first question, Gov. Newsom will remain in office.

Mike, who arrived at a poll station in Arcadia, California, in the early morning of Sept. 4, said he believes Newsom’s policies are the root cause of the worsening situation in California.

“I hope we can get some fair and conservative changes,” he told The Epoch Times, “The cost of living here is ridiculous.”

Mike also noted that the homelessness problem and safety in the local area are both deteriorating. “Absolutely it starts with the governor—his laxed approach to the no-bail system, the people that he’s choosing,” he said. “I don’t know what their progressive agenda is, but it’s definitely not working from the start; it’s only going to spiral into something worse.”

Rhonda Lynn, who is against the various restrictive policies the governor implemented during the pandemic, also wants to recall Gov. Newsom.

“I believe that Gavin Newsom needs to be recalled. He put a lot of  ‘Mom-and-pop’ out of business, while the big companies who kept remaining in business made a huge profit,” she said. “And now you’ve got a lot of people who cannot work and have no money, because of him.”

Some other voters hope Newsom will stay. One of them, who chose to remain anonymous, told The Epoch Times that he believes many accusations against Newsom are false.

Some Californians started the “Recall Newsom” petition as a grassroots campaign in June last year. Many residents signed the recall petition because they opposed Newsom’s lockdown policies in response to the CCP (Chinese Communist Party) virus outbreak (commonly known as the novel coronavirus), which  included early release of 76,000 prison inmates.

This is the second time a recall has been triggered in California. Previously, Democratic governor Gray Davis was recalled in 2003 and replaced by Republican Arnold Schwarzenegger.

The California Secretary of State’s Office stated that every voter in California will receive a mailed ballot for this special election.

Besides the vote-by-mail option, voters can cast their votes in person at a polling place. Fifteen counties in California opened early voting centers on Sept. 4.