California Zero-Emission Vehicle Sales Increase by Over 100 Percent in Two Years, Accounts for 40 Percent of US Sales 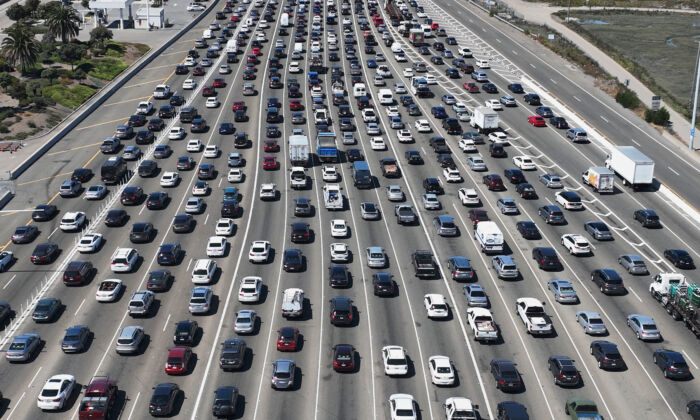 Traffic backs up at the San Francisco-Oakland Bay Bridge toll plaza on Aug. 24, 2022. California announced a ban on the sale of new gasoline-powered cars after 2035 in a push to transition to electric vehicles, on Aug. 25, 2022. (Justin Sullivan/Getty Images)
By Naveen Athrappully

The sale of zero-emission vehicles (ZEV) in California has risen by more than 100 percent in two years, with the state making up 40 percent of U.S. sales of such vehicles in 2022 and roughly 19 percent of all cars sold in California.

“California continues to lead the zero-emission vehicle revolution with groundbreaking policies and investments that drive innovation, create good jobs, and expand ZEV access and affordability across the state,” said Gov. Gavin Newsom, according to a news release on Jan. 20.

“Keeping our focus on the communities that are most impacted by the intensifying climate crisis, we’ll keep pushing ahead to make our clean transportation future a reality in California.”

Back in September 2020, Newsom had announced a plan to phase out gasoline vehicles in the state by 2035. Last year, the state mandated that all new vehicles sold by 2035 must be fully electric or plug-in hybrids (PHEV).

California has initiated several measures to boost ZEV use in the state. In December, for example, the California Energy Commission green-lit a $2.9 billion investment plan to accelerate the state’s hydrogen refueling and electric vehicle-charging targets.

The state is expected to secure $384 million in federal funding to install charging stations under the National Electric Vehicle Infrastructure program. It is home to 55 ZEV and ZEV-related companies.

California’s push for ZEV adoption is happening at a time when there are persistent doubts about the state’s power infrastructure. In September 2022, the state’s power grid manager issued an alert asking people to avoid charging their electric vehicles amid rising demand for electricity.

Californians questioned the state’s 2035 mandate to only allow the sale of electric cars given ongoing power issues. “If we can’t do these things today, how are we going to do when everything needs to be electric?” a driver asked in an interview with KTLA-TV.

Meanwhile, some states are seeking to restrict the sale of EVs. In Wyoming, six Republican lawmakers are pushing to phase out the sale of new electric vehicles by 2035 to protect its oil and gas industries as well as to preserve crucial resources.

In a recently introduced bill, the lawmakers note that allowing the proliferation of electric vehicles at the expense of gas-powered vehicles will seriously affect the state’s economy as well as its communities.

Moreover, the batteries used in the EVs contain critical minerals needed in many other applications. The domestic supply of these minerals is limited and at “risk of disruption,” the bill stated.

The electric vehicle “mania” might be at an end, or, at a minimum, easing down, according to research, as concerns about supply chains, lithium sourcing, inflation, and more affect production capacities while customer demand decelerates globally,

California has multiple rebate programs to boost ZEV adoption. This includes Clean Cars 4 All, Clean Vehicle Assistance Program, and the Clean Vehicle Rebate Project (CVRP), which is the largest of the three initiatives.

Targeted at low-income households, these programs grant rebates in the range of $7,000–9,500 for buying a ZEV vehicle. More than 30,000 low-income residents are estimated to have taken the benefit of rebates under CVRP.

Meanwhile, there are also worries that the ZEV mandate might make California a two-tiered society when it comes to the distribution of vehicles.

In a commentary at The Epoch Times, John Seiler, a former press secretary for California State Sen. John Moorlach, speculates that the top tier would consist of people who can afford the higher-priced electric vehicles.

“The bottom tier of car owners will be those who can’t afford new EVs, or even EVs a couple of years old. They will be forced to buy much older EVs at high prices, with mechanical problems that will strain family budgets even more,” he warns.