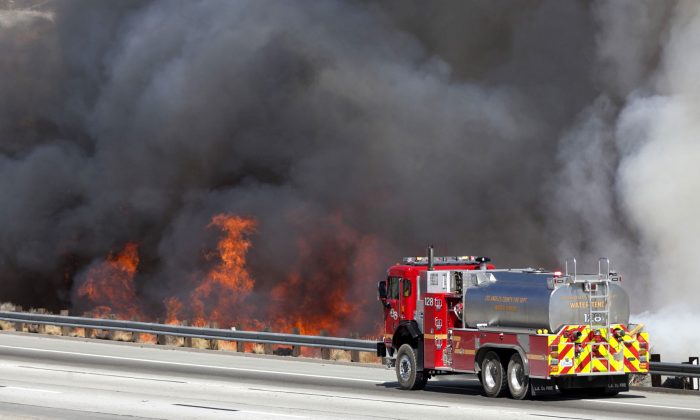 A Los Angeles County Fire water tender fire truck sprays down flames as they near the northbound Highway 14 during the Sand Fire in Santa Clarita on July 22, 2016. (Katharine Lotze/The Santa Clarita Valley Signal via AP)
US

LOS ANGELES—Wildfires burned out of control Saturday in mountains north of Los Angeles and near Big Sur on California’s scenic Central Coast, posing a threat to some 1,300 homes, authorities said.

Southern California firefighters faced another day of triple-digit heat from a dome of high pressure over the region, and while Central Coast temperatures were more moderate, conditions included winds and low humidity.

The fire in northern Los Angeles County grew to more than 8½ square miles, darkening skies with smoke that spread across the city and suburbs, reducing the sun to an orange disk at times.

The fire erupted Friday afternoon in the Sand Canyon area near State Route 14 as the region was gripped by high heat and very low humidity.

About 300 homes were under mandatory or voluntary evacuations, but none had burned.

“I got all my tenants out of the RV park and for the people that weren’t there and still have dogs, I broke into their trailers and got their dogs out,” Kurtis Bell, manager of River’s End RV Park, told KCAL-TV.

Metrolink train service in the area was halted Friday and on Saturday was subject to delays.

About 300 miles up the coast, California Department of Forestry and Fire Protection firefighters battled a nearly 3-square-mile blaze in rugged mountains north of the majestic Big Sur region.

The blaze 5 miles south of Garrapata State Park posed a threat to 1,000 homes and the community of Palo Colorado was ordered evacuated, Cal Fire said. A middle school in Carmel-by-the-Sea was readied as an evacuation center.

More than 300 firefighters were on the lines.