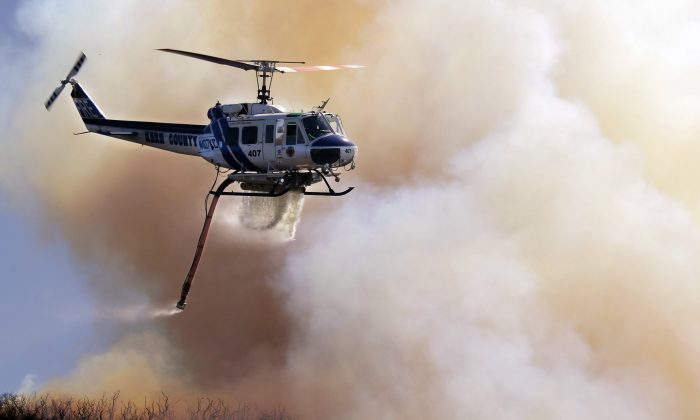 A fire helicopter makes a water drop on a hotspot over a hill near Thousand Oaks, Calif. in this file photo. A wildfire near Santa Barbara caught thousands of campers off-guard and forced their evacuation May 27. (AP Photo/Nick Ut)
US

California Wildfire Sends Campers Off to the Races

In California, Memorial day turned out to be not quite what most campers had expected. Thousands of them had to flee from a wildfire fueled by winds, driving them out of the Santa Barbara mountains.

The fire broke out about Monday afternoon in Los Padres National Forest about 15 miles north of Santa Barbara, and hours later had grown to 1,000 acres — or 1.5 square miles — amid winds of about 20 mph, U.S. Forest Service officials said. It was 5 percent contained. The fire broke out around 2:45 p.m. on Monday, May 27.

According to officials, between 4,000 and 6,000 holiday campers and residents had to evacuate.

A huge plume of gray and white smoke rose over the mountains and hovered over Santa Barbara, where many residents were flooding Facebook and Twitter with photos.

“I’ve got my little dog, and he’s ready if I need to pack him to leave,” Devlin added.

The Times also reports that four water tanker aircraft and two helicopters were used during the day, but had to be grounded at nightfall.

Meanwhile, officials hope they will get help from the weather. “We’re hoping the temperatures drop and the humidity rises,” county fire Capt. David Sadecki said.

The American Red Cross set up an evacuation center at Santa Barbara City College and another was set up for horses stalled in the area’s many stables, but Andrew Madsen doubted they were actually going to be used. According to him, conditions were good enough for people to return home late Monday.

The county has issued an air quality warning because of the smoke and wind, advising people to limit time spent outdoors and to avoid outdoor exercise altogether.