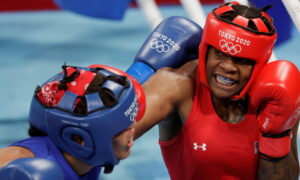 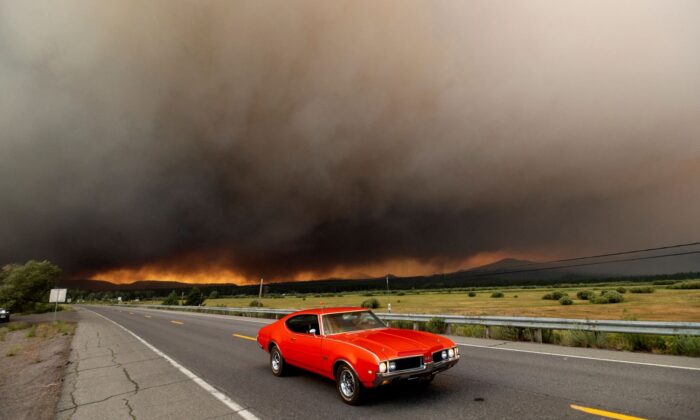 A car leaves Chester, Calif., which is under mandatory evacuation orders, as the Dixie Fire burns on the edge of town on Aug. 4, 2021. (Noah Berger/AP Photo)
US News

Wildfires in Northern California have forced more than 16,000 evacuations and destroyed the town of Greenville, located in Plumas County.

The Dixie Fire as of Aug. 5 is 35 percent contained and has burned more than 322,000 acres, according to federal officials.

The blaze ripped through the small town of Greenville, located about 110 miles northeast of Sacramento, on the evening of Aug. 4. The town, which dates back to California’s Gold Rush era, has a population of about 1,000.

“Last night, firefighters, including aerial resources, aggressively attacked large flame fronts in an effort to defend structures. As fire entered the Greenville area, firefighting efforts shifted to assist law enforcement in evacuation efforts,” according to a bulletin posted on the federal government’s Incident Information System. “A damage assessment team is being requested to evaluate damage in the Greenville community.”

Initial reports suggested that firefighting efforts saved about 25 percent of the structures in the town, officials said.

Officials urged residents to evacuate the area earlier in the week due to the wildfire.

In a post on Facebook on Aug. 4, the Plumas County Sheriff’s Office wrote, “If you are still in the Greenville area, you are in imminent danger and you MUST leave now!! Evacuate to the south to Quincy. If you remain, emergency responders may not be able to assist you.”

“I can tell you a good portion of the town of Greenville was destroyed. … I don’t know if it’s half or more or less, but there were pretty heavy losses,” Cal Fire spokesman Rick Carhart told The Washington Post.

Jake Cagle, the operations sections chief for California’s fire incident management team, noted that some people stuck around in Greenville and didn’t leave.

“Right now, there are still a lot of people unfortunately in Greenville that did not evacuate. And so, we are having to deal with that … and get all those folks out,” Cagle told media outlets on Aug. 5.

The cause of the Dixie Fire, meanwhile, is under investigation. California’s largest utility, PG&E, said that some of its equipment might have played a role in sparking the blaze—along with the smaller Fly Fire, which later morphed into the Dixie Fire.

“We lost Greenville,” Rep. Doug LaMalfa (R-Calif.), who represents the area in Congress, said in a video statement. “We have to stop making this happen.” He didn’t elaborate.

The River Fire, near Colfax and less than 100 miles south of the Dixie Fire, was zero percent contained, but officials said they expected cooler overnight weather and a reversal of the wind direction to help. At least four homes were destroyed in Colfax, a Placer County town of 2,000 people about 50 miles northeast of Sacramento, according to a Reuters witness.