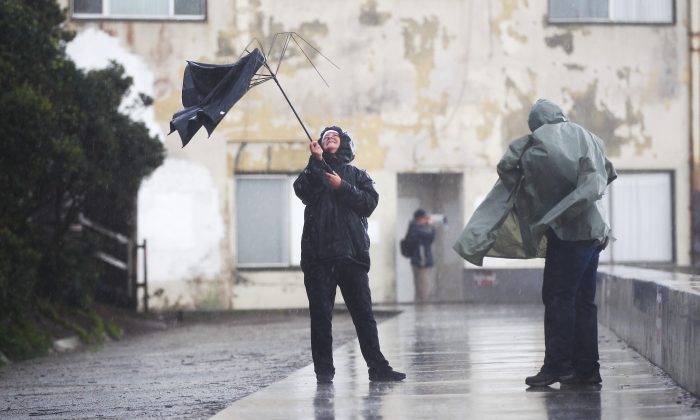 It came a day after the week’s strongest storm drenched the state and much of the Southwest, stopping cable cars in San Francisco, flooding roadways and stranding motorists across Los Angeles, and dumping heavy snow in northern Arizona.

The region was expected to begin drying out on Friday before another round of light rain moved into California over the weekend. More El Nino storms are forecast over the next several months.

Well over 2 inches of rain fell Wednesday on some mountain areas, including 3.5 inches in Angeles National Forest in Southern California. The storm dropped a foot of snow on ski resorts in San Bernardino County and around Lake Tahoe while causing dozens of crashes on slippery Nevada roads from Reno to Fallon.

To the south, the National Weather Service issued a winter storm warning for much of northern Arizona through midday Friday.

Flagstaff had 19 inches of snow on the ground; Grand Canyon National Park halted all shuttle bus service due to icy roads; and the Arizona desert saw its fourth straight day of rain.

Forecasters predicted significantly less rain for the rest of the week but warned that flash floods were still possible before skies finally cleared. In California, high surf warnings remained in effect for Los Angeles, Orange, Ventura and San Diego counties.

A mobile home park was evacuated Thursday in the Newhall area of Southern California, but voluntary evacuation advisories were cancelled in some other areas where wildfires had stripped hillsides of vegetation and created mudslide dangers.

Despite the problems, the wet weather in California was welcome news for the state suffering from a severe drought. Officials, however, warned residents against abandoning conservation efforts and reverting to wasteful water-use habits.

The current El Nino system—a natural warming of the central and eastern Pacific Ocean that interacts with the atmosphere and changes weather worldwide—has tied a system in 1997-1998 as the strongest on record.